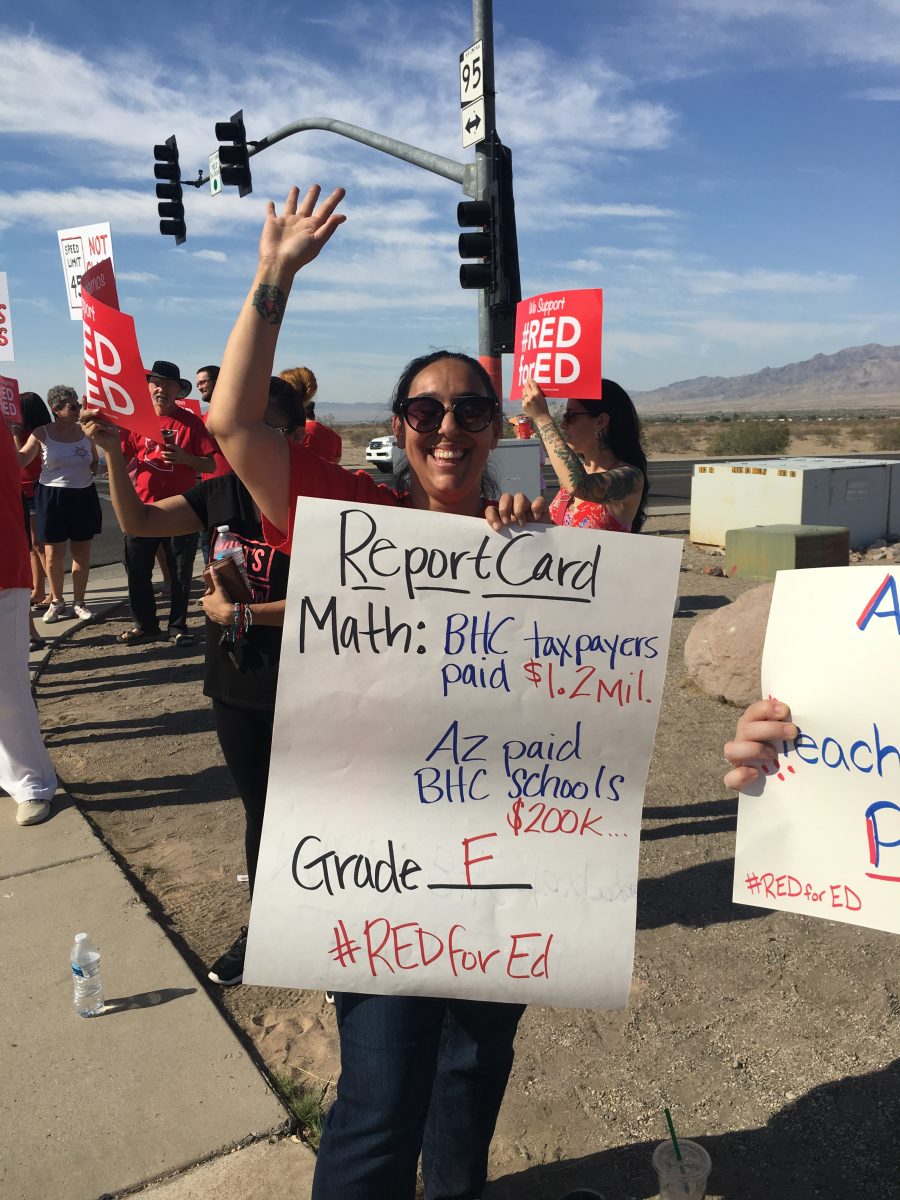 “We were given permission to take our personal paid time off to participate in the support of the #RedForEd statewide movement,” said Smith. “We have representation from every faction of our school district. We even have teachers from Needles (California) here. It is amazing.”

“This is emotional for us,” said Smith. “The issue is close to our hearts and we really appreciate the community showing their support for every educator in our area.”

Earlier this month, Governor Ducey unveiled a proposal that would allocate money for pay raises to Arizona teachers by 20 percent by 2020. However, Smith says the five demands the #RedForEd movement was asking for were not fully met by the Governor.

“The only demand met was one, and that was the teacher salary,” she said. “He did not come out with a very effective plan to keep the raises he proposed over the next few years going. No real answer to where that money is going to come from either.”

“It is coming from factions that us educators would never accept, ever. We teach special needs, we have disabled students in our classrooms and to take from them is unacceptable.” she added.

Smith said she believes people may have gotten the wrong idea as to what the movement’s purpose is.

“I think a lot of people that saw that (the pay raise proposal) were like, “Oh, the teachers are getting a raise and now they are being greedy”, but that is not it.” she said. “The demands we are asking for is our funding, for our students. Millions of dollars have disappeared and we don’t know where it is, but I can tell you it is not in our classrooms.”

The local school districts are reportedly allocated $1.2 million dollars, but Smith says the district has only been receiving a sliver of that at $200,000.

“We don’t want to lose our teacher to other states. The retention rate of our teachers now is bad,” Smith said. “I can say that our Superintendent’s have been very supportive of our movement. Supt. Riley Frei and Supt. Benji Hookstra are fully aware of the funding issues that face us and they are doing what they can to help.”

Smith added, “Supt. Frei even drove by this morning to show us his support. He gave us a round of applause and was wearing red. We are standing here today for our students, our children. They deserve better.”

The Bee has learned the funding for tutoring, after school, Flex Friday enrichment program and summer school has reportedly been affected by the lack of funding.

Bullhead Elementary School District Board Member Cynthia Cochran was among the group showing their support for the teachers on Thursday.

“I am a former educator and this has been going on too long,” she said. “The funding for our school has diminished incredibly. We need to put more money back into our schools.”

“I have been with the school district for 15 years as a teacher and two of my daughters also work within the districts. I am out here showing support in hopes of getting the funding that we are lacking,” Hardy said. “We have already lost so much of the programs that we need for our children’s education.”

Hardy touched on the fact the district had reportedly pulled the flex Friday and summer school enrichment programs.

“It gave students the opportunity who needed the extra push to get it before the start of the next school year,” she said. “It is time for a change and that is why we are here today.”

Hardy’s daughter, Caisey Mlekush, a senior at Mohave High School, stood near the stoplight at Marina Boulevard and Highway 95 holding a #RedForEd sign as motorists drove by honking their horn in support.

“This affects me too,” she said. “My whole family are teachers and I plan to continue my education for another eight years. We need the funding to do so.”

Mlekush said she chose Thursday as an absent instead of the upcoming Senior Ditch Day.

“This is more important,” she added.

Earlier Thursday morning, teachers from Mohave High School participated in a “walk-in” as their part of supporting the movement.

A release by the district spokesperson said schools in the Bullhead Elementary School District and Colorado River Union High School District would have shortened classroom time on Thursday.

It is not clear how long the statewide teacher’s strike will last, but school district officials said if there are any changes over the weekend that would affect instructional time come next week, parents would be notified via dialer, social media, email and posted to the district’s websites. 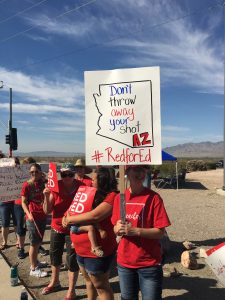 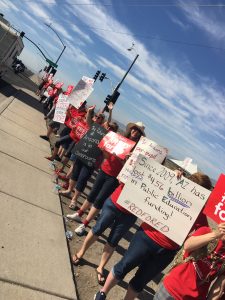 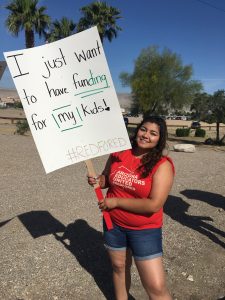 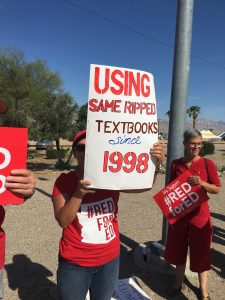 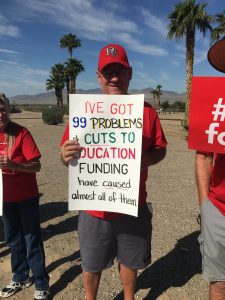 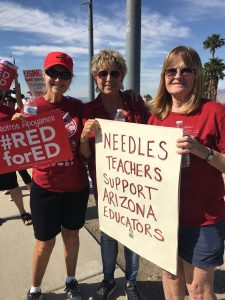 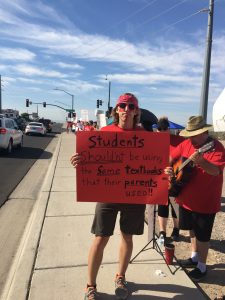 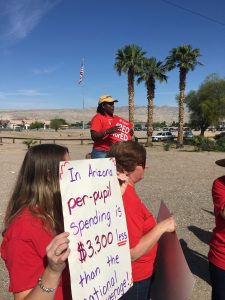