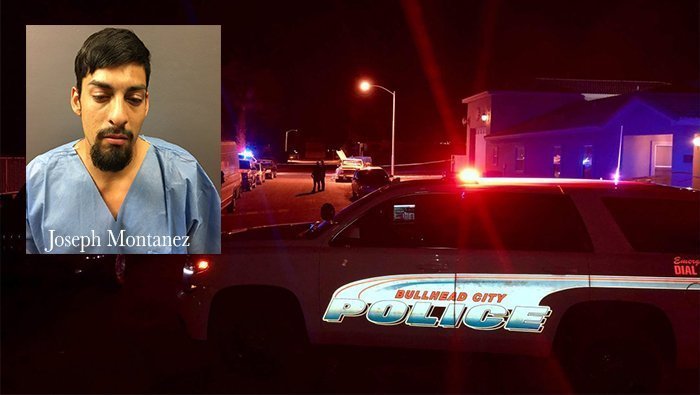 BULLHEAD CITY — A local man has been arrested for allegedly assaulting his girlfriend’s father after the two engaged in an altercation that ended with one person being shot.

Bullhead City Police spokeswoman Emily Fromelt said police were called for a domestic fight in the 1300 block of Park Lane shortly before 9 p.m. Tuesday night. It was reported that Joseph Adam Montanez and his girlfriend’s father, Robert A. Demaria Jr., 52, got into an altercation.

According to reports, the two men were physically fighting and Demaria reportedly assaulted Montanez with a crowbar. When Demaria went to his truck, Montanez reportedly went outside and started throwing rocks at Demaria. Demaria got out his 22 calibur rifle and Montanez reportedly grabbed the barrel of the rifle and a struggle ensued. The rifle discharged and wounded Montanez.

Fromelt said Demaria was being treated for his injuries and he will face the same charges.

The incident remains under investigation.

← Prev: One Injured In Shooting Next: 17 Dogs Removed From Kingman Home →