In the era of renaissance on iconic Route 66 the neon is again glowing bright and old diners like the Wagon Wheel in Needles, California, or the one at Grand Canyon Caverns are doing a booming business just like it was still 1964. Route 66 in the modern era is a chain of linked time capsules that stretches from Chicago to Santa Monica and America’s longest theme park. As a result it is easy to forget that there was a time not so long ago when this highway was billed as the “Main Street of America” or that it was an artery of commerce traveled by truck drivers, vacationing families, the down and out seeking a better life in California, celebrities, outlaws, murderers, and nefarious characters. It is easy to forget that U.S. 66 was not just the Main Street of America, it was also one of the most popular and most heavily traveled highways in the nation. 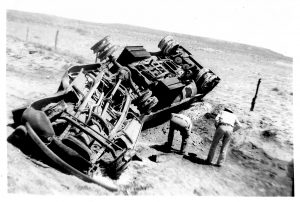 An ever increasing flow of traffic on the often narrow old highway resulted in countless horrendous crashes on Route 66, and gave rise to its reputation as “Bloody 66.” On Friday, November 19, 1954, a young and rising star named Sammy Davis Jr., and Charlie Head, were returning to Los Angeles from a performance in Las Vegas, Nevada. Head drove the first leg of the trip, and in Victorville after a stop for gas, Davis took the wheel. As he drove the Cadillac on Route 66 down Cajon Pass, Head climbed into the back seat to sleep. Shortly after 7:00 a.m. at the intersection of Kendall Drive, City 66, and Cajon Boulevard, U.S. 66, 72-year-old Helen Boss at the wheel of a Chrysler had missed her turn onto Kendall and was in the process of backing up the highway when Davis slammed into the rear of her car, left the highway, and crashed into a stone column at a driveway entrance.

The impact was so severe the engine of the Cadillac was pushed into the front seat, and Davis’s face slammed into the steering wheel. Numerous bones in his face were fractured, his nose was broken, and his left eye was pushed from the socket. His knee cap was shattered by impact with the emergency brake handle. Head was thrown face first into the back of the front seat, and suffered a shattered jaw, and lost most of his teeth. Boss suffered a back injury, and her passenger, 69-year-old Bessie Ross, suffered a broken leg.

Davis and Head were rushed by ambulance to the hospital in San Bernardino at the corner of Fourth Street and Arrowhead Avenue. That evening Frederick H. Hull, an acclaimed surgeon removed Davis’s left eye, and attached a prosthetic socket onto the muscles which would be used to hold and direct a glass eye after recovery, and made repairs to his right. 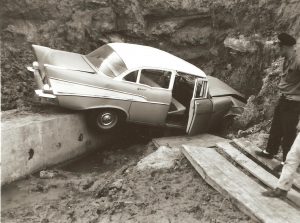 The very real threat of a serious or even fatal crash on Route 66 was but one of the ways that travelers encountered death on this highway. Antiquated highway engineering often transformed a rain storm into tragedy.

Rain is a rarity along Route 66 in the California desert. As a bit of historic trivia, at Bagdad, California located west of Needles in the heart of the Mojave Desert, a new record for lack of precipitation in the United States was set in the early teens. Between October 3, 1912 and November 8, 1914, not a single drop of rain fell. This harsh landscape seems an unlikely place to die by drowning. However, that is exactly what happened in the summer of 1959.

“RAILROAD WORKERS MISSING IN FLOOD” – The Daily Inter, Lake Kalispell Montana, dateline Needles, California, August 18, 1959 (UPI) – “Four railroad section hands were missing today and hundreds of motorists marooned by a desert cloudburst that flushed out highways and bridges east and west of this Colorado River community. Six members of a Santa Fe Railway road crew dispatched to check a rail washout 15 miles north of here Monday night were swept away by waves 10 to 15 feet high that overturned their truck. Two of the men, identified by a railway dispatcher as track foreman George Ashmore and Geronimo Rodriguez later were found and taken to Needles Municipal Hospital. Extent of their injuries was not released but a hospital spokesman said they were getting along “just fine.” The Santa Fe Railroad spokesman said the missing men were Charles Sanchez, Francis X Yazzie, Ben Elthe, and Fred Atne. The dispatcher said the missing men possibly were drowned in the swirling floodwaters that flashed down desert canyons. Search crews began looking for the men at dawn.

East and westbound trains of the Santa Fe system were rerouted around the stricken area because of bridge washouts and weakened structures. Approximately an inch of rain fell in the area during the cloudburst. Police said Highways 66 and 95 on both sides of the Colorado River were blocked and would remain closed for up to 12 hours while detours around the damaged bridges were made.”

In the 1930’s, the Okies and motorists traveling to Los Angeles for the Olympics shared the highway with some of the most notorious gangsters in American history including Bonnie and Clyde, John Dillinger and the lesser known Kimes brothers. George and Matthew Kimes robbed their first bank in Depew, Oklahoma (the first community that was bypassed in a Route 66 realignment) on June 30, 1926. Matt had escaped from the jail in Bristow the day prior.  On August 20, they stole an estimated $5,000 from a bank in Beggs, Oklahoma and, a few days later, led a gang that raided two banks in Covington simultaneously. A week later the brothers were stopped by police in Sallisaw. During the escape and running gun battle, Deputy Perry Chuculate was killed, and two hostages were taken as they fled toward Arkansas. Surrounded near Rudy the next day at the home of a cousin, Ben Pixley, the wounded brothers surrendered to police and were jailed in Sallisaw to await trial. George was sentenced to 25 years for bank robbery and sent to McAlester state penitentiary, Matthew was given a sentence of 30 years for the death of police officer Perry Chuculate.

Route 66 in the modern era is an almost magical place where the past and future blend seamlessly. The romanticized image of what once was masks the reality of a highway that was once feared, that was once known as bloody 66.

Escape to Arizona this Winter