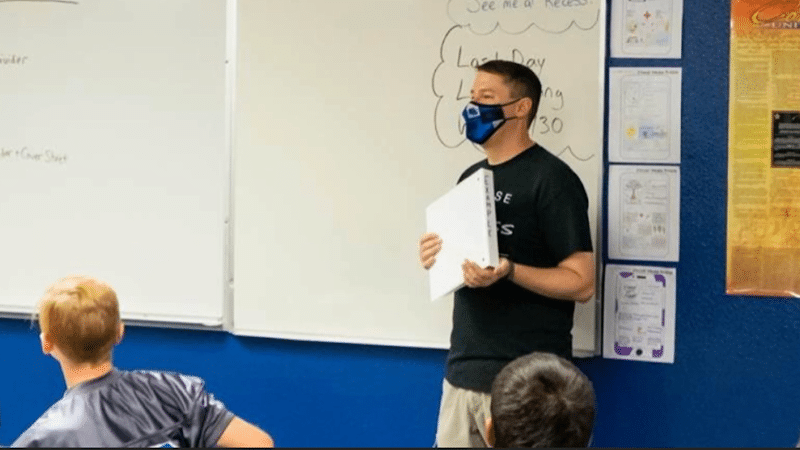 The inaugural $10,000 Hodel Award was presented to Marcks in 2018 because of his academic success and volunteer work helping students. The award is given each year to a graduating MCC student, and they can spend the money however they see fit. Marcks used it to continue his higher education and obtain a Master of Education in Educational Technology from Northern Arizona University.

“The money was put toward going to NAU and furthering my master’s degree with them so I could be better prepared for everything when I became a teacher,” he said. “If I didn’t win the award, I would’ve had to take out student loans to pay for tuition.”

While earning his associate degree in liberal arts from MCC he was also working toward his bachelor’s degree in elementary education from NAU. Marcks graduated from MCC in 2018.

He said MCC provided him the foundation to attend both schools at the same time.  He was able to come to the MCC campus and attend the NAU classes via live remote technology, similar to Zoom.

He is now an 8th grade social studies teacher.  He has been at KAOL for four years, which is also where he did his student teaching. He decided to go into teaching because it was similar to what he did in the U.S. Air Force as a Staff Sergeant.

“Becoming a teacher was always something in mind that I wanted to do, from mentoring younger troopers as a sergeant, to back in high school when I looked up to one of my favorite teachers who really inspired me,” Marcks said.

His ten years of military experience also helped prepare him for his career as an educator. He takes what he learned and brings it into the classroom, which helps him connect with his students.

When he left the military he decided to attend MCC to pursue a career in education, plus his sister had a positive educational experience at the college. While at MCC he joined the Veteran’s Club, Phi Theta Kappa Honor Society and Student Activities Council.

He said being a part of the Veteran’s Club really helped him get more involved with campus activities and grow as a person. Marcks also enjoyed getting to know veterans from other military branches who were attending the college and shared common experiences.

To learn more about MCC’s Elementary Education program, visit Mohave.edu/Education.  Those who would like to improve their lives through higher education can start today by filling out the free online application at Apply.Mohave.Edu.

If you would like to donate to the college foundation to help provide scholarships for students in Mohave County, please visit Foundation.Mohave.Edu.