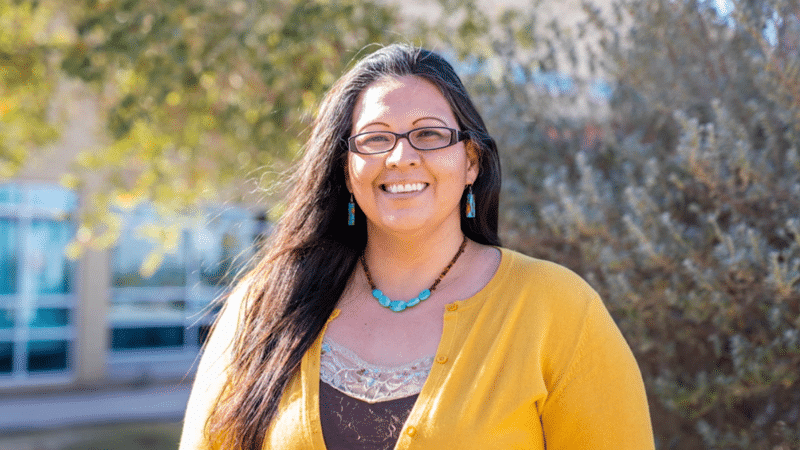 MOHAVE COUNTY – The Mohave Community College Board of Governors has a new member, Candida Hunter. She represents District 1, which encompasses parts of Kingman, Hackberry, Peach Springs, Littlefield, Wikieup, Truxton, Moccasin and North Canyon. Hunter was appointed to the vacant seat left by former MCC Board member Vance Miller after he retired from the position. She decided to become an MCC board member because she believes its important to give back to the community.

“I wanted to become a board member because I believe in the mission of MCC and believe I can contribute my skills and experiences to serve rural and underrepresented communities,” Hunter said. “I grew up on the Hualapai reservation where I was taught to go away to school, come back and serve others. I believe in giving back to communities and learning from others is important.”

She’s looking forward to serving all the communities in District 1. Hunter added that she’s excited to learn more from the current board members and share with them her experience from working with tribal communities, which may bring a new perspective.

Hunter is Hualapai and Mexican and serves as a Senior Director of Tribal Affairs for First Things First (FTF). FTF is a statewide organization that funds early education and health programs to prepare children to succeed in school.

As director, she is responsible for ensuring the facilitation of effective government-to-government relations between FTF, a state agency, and Arizona’s Tribes by building and strengthening organizational relations with tribal partners, fostering tribal relations through collaborative partnerships, and facilitating the provision of culturally responsive early childhood services in tribal communities.

Prior to joining FTF, Hunter served as a Hualapai Tribal Council member and a volunteer on the FTF Hualapai Tribe Regional Partnership Council and several other community groups. She was also named as a 2018 winner of the Native American 40 Under 40 award by the National Center for American Indian Enterprise Development and is a Global Leader for Young Children at the World Forum Foundation.

Hunter is a fellow of the Flinn-Brown Civic Leadership Academy focused on expanding the cadre of Arizonans in state-level civic leadership positions with the knowledge, skills and commitment to address the state’s critical long-term issues.

She is a fellow of the BUILD Equity Leaders Action Network, which works to promote equity in early childhood systems. Hunter is the FTF representative on the Arizona Advisory Board of Indian Health Care which advocates for increasing access to high quality health care programs for all American Indians in Arizona.

Hunter also serves as the Vice Chair of the Grand Canyon Resort Corporation Board of Directors which is focused on creating economic development opportunities for the Hualapai Tribe.

Hunter said she previously served as the Hualapai Education Coordinator where she was responsible for administering high education scholarships, helping students apply for college, vocational schools and conducting high school outreach to encourage them to continue their education.

Hunter is a mother and caregiver of four children, ages 5 to 15. On her free time, she enjoys spending time with her family, traveling and volunteering. She would describe herself as a mother and aunt, a human services professional and former policymaker who strongly believes the success of future generations begins in the early years of life.