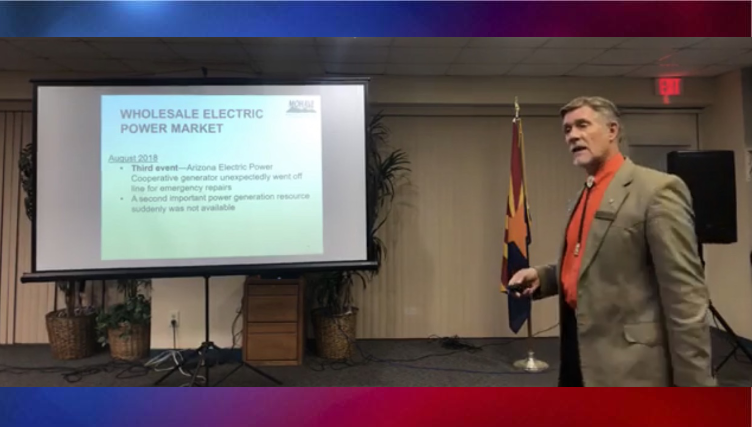 As a result, the savings MEC worked diligently to pass on to members in the Purchased Power Adjustor will be reduced.

“As a not-for-profit utility, MEC makes every effort to save its members money by negotiating for the best prices possible,” said Tyler Carlson, CEO of MEC. “In August and September Mohave Electric had to pay 5-10 times more than last year for wholesale purchased power.”

The shortage in California resulted in power producers from Arizona and Nevada selling at a higher rate, resulting in the most expensive two-month period for MEC in nearly 20 years. In the same time frame, the AEPCO generator went offline and MEC lost an important power resource.

“It was an example of cost-and-demand,” Carlson said. “With the shortage in California, rates spiked because demand was high.”

The result left MEC with an unanticipated $3-4 million expense.

The Purchase Power Adjustor, required by the Arizona Corporation Commission as a way to adjust for purchased power variances not included in the energy rate, has been a 1.5 cents credit per kilowatt-hour. The result of the increased cost will mean the credit will be reduced to .75 cents per kwh beginning in January, leading to an average increase of about $7.

Although the PPA is subject to change, when conditions are favorable, savings are passed along to members.

Carlson explained the credit reduction is not a rate increase.

“Our members will still receive a credit with each bill, but that credit has been reduced so MEC can pay the balance of what is owed,” Carlson said. “It does mean members will see an increase in their bill because we will be unable to provide the same savings we have in the past.”

“Fortunately, the credit reduction will begin at a time of year many of our members will be using less electricity,” he said

Because MEC is not-for-profit, rates are set to cover the cost of doing business and are not marked up to make a profit. Any margins left at the end of the year are allocated to members as capital credits.

“Nobody wants to hear about a reduction in savings, but the situation this summer was out of our control” Carlson said. “Mohave Electric will continue to work in the best interest of our members.”

Carlson answered questions from the audience during the informative session held at the Bullhead Area Chamber of Commerce in Bullhead City.

He also stressed that energy efficiency can help reduce costs of electric to members. In addition, the cooperative offers programs to assist low income residents.