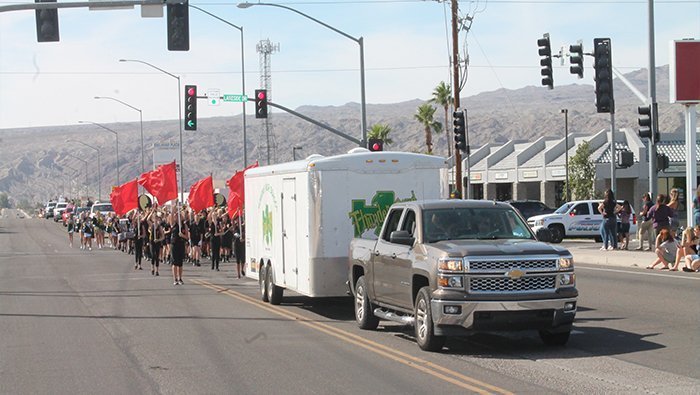 BULLHEAD CITY – The countdown to Mohave High School’s golden anniversary begins this month with the Thunderbirds’ 49th annual homecoming parade. The yearly parade down Hancock Road will be Friday, September 21.

District spokesman Lance Ross said instead of an afternoon parade, the 2018 procession will begin at 9:30 a.m. to take advantage of cooler temperatures for marchers and minimize the impact on businesses along the parade route.

In addition to floats and entries by two dozen Mohave High sports programs, teams, clubs and organizations, area businesses and organizations are again invited to participate in the parade at no charge, said Ross.

Entries will stage that morning at the corner of Gemstone Avenue and Langford Drive. The parade route will run east on Hancock from Langford to the high school’s north entrance, just west of Highway 95. Businesses along the parade route, which will be closed by the Bullhead City Police Department, are being notified by members of Mohave’s student council.

Traditionally, hundreds of onlookers line the parade route. Hancock will have “rolling closures,” reopening once the parade has passed, said Ross.

An earlier start to the parade also gives football players, band members, cheerleaders and others a chance to recharge before that night’s homecoming football game against the Flagstaff High School Eagles.

The parade’s theme is “Welcome to the Jungle” because, said student body vice president Zachary Rajapakse, “We’re definitely not in the jungle in the Mohave Desert.”  All proceeds from the parade will benefit the student council’s charity of choice, Make-A-Wish Foundation.

Business sponsorships are also available for the parade, including actual and in-kind donations.

The first bell for classes at Mohave High rang on September 5, 1969. The school will be gearing up for Mohave’s 50th anniversary next year.

← Prev: Eligible High School Juniors Have Chance To Win Trip To Washington, D.C. Next: Elizabeth Smart Kidnapping Suspect To Be Released From Prison Next Week →