Motorhome Goes Up In Flames 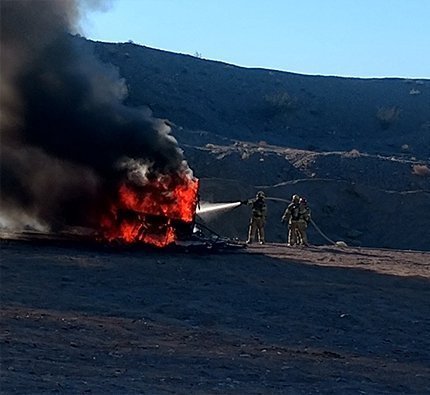 Firefighters from the Mohave Valley Fire Department arrived on scene to find the motorhome fully engulfed. Large billows of smoke covered the sky which could be seen by residents in Fort Mohave.

The fire was contained immediately by firefighters, however, the fire continued to smolder as crews worked to eliminate any additional hot spots.

One witness at the scene said he heard an explosion before seeing the smoke.

“I live right down the road and I just heard this “boom” noise. I came outside and saw the black smoke,” he said.

It was not immediately known what may have caused the noise.

Mohave Valley Fire Marshal Don Gibson said that his agency responded to the reported motorhome fire shortly before 8 a.m. The motorhome was located at the east end of Jerome Road next to the foothills.

No injuries were reported and the cause of the fire remains under investigation with the Fort Mojave Tribal Police Department.