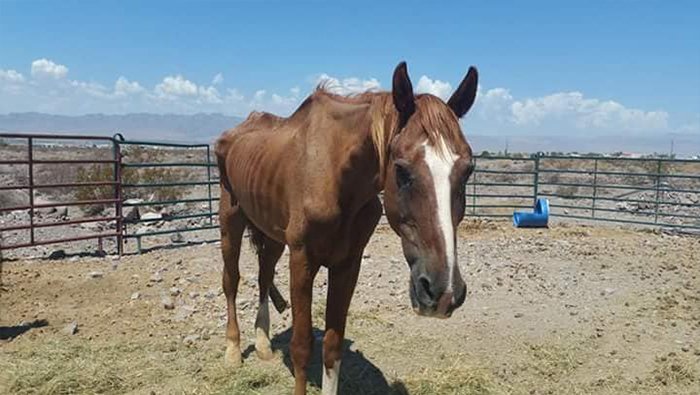 PAHRUMP, Nev.–Five horses that were reportedly at the forefront of an animal abuse case in Mohave Valley are now in the custody of Nye County authorities.

The investigation began two weeks ago when photos of seven horses surfaced on a social media crime page. The photos depicted multiple horses that allegedly looked underweight and standing in corrals without overhead shelter, food or water.

Mohave County Sheriff’s spokeswoman Anita Mortensen said their agency was investigating the case, however, when the horses left the county the case was halted.

Mortensen did state two horses were left behind at the Charlotte Drive property, but were later placed in the custody of a caregiver while the investigation continued.

The owner of the horses, whose name has not officially been released by authorities, reportedly fled the area on August 19 and headed to Nevada. It was on Wednesday, Aug. 22 that concerned citizens following the social media posts learned the horses had been taken into custody by Nye County Sheriff’s Office Animal Control Division.

Nye County Sheriff Lt. David Boruchowitz confirmed for The Bee last week that his agency had taken custody of the five horses, but did not release any other details.

The five horses are currently being held at Desert Haven Animal Society in Pahrump, Nevada. The shelter is a no-kill open-admission public animal shelter that services Nye County.

“We do have them,” said Sheri, of Desert Haven. “They are doing pretty well and we have them, except for one, all on a free-fed program to get their weight back up in a healthy manner.”

The shelter is accepting any donations for the five horses. They are in need of fly masks, halters, sweet feed, hay and donations to offset the costs of a farrier and gas. To make a donation, visit www.deserthavensociety. org or mail to: 1511 Siri Lane, Pahrump, Nevada 89060. For any additional questions on donations, call them at 775-751-7020.