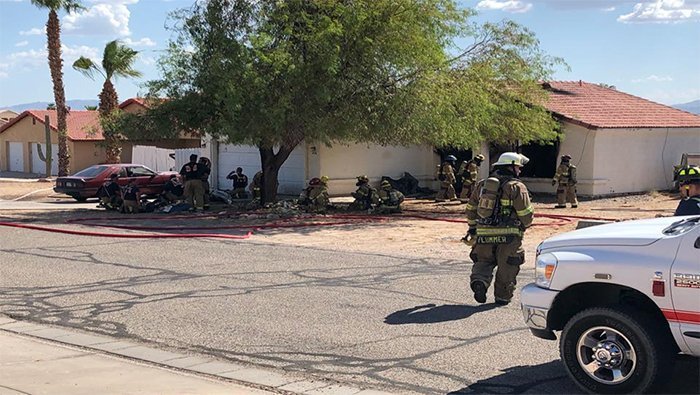 FORT MOHAVE–Firefighters battled two fires over the weekend at the same house in the 5200 block of Tierra Linda Drive in Fort Mohave.

Fort Mojave Mesa Fire spokesman James Kartinen said at this time the fires are being considered suspicious and are currently under investigation with the fire department and Mohave County Sheriff’s Office.

Firefighters were dispatched late Friday afternoon for a structure fire off Tierra Linda Drive. Crews arrived to find the home partially engulfed and began attacking the fire. A short time later, crews were able to fully extinguish the blaze.

One firefighter had to be treated for heat related issues and was medically cleared a short time later, said Kartinen.

A neighbor told The Bee he was outside across the street from the house when it went up in flames.

“A guy (reportedly) rolled by the home and threw a cocktail through the window and the house exploded in fire,” said the neighbor. “The car than just drove off.”

It was not known if the home was occupied at the time the fire started.

Fort Mojave Mesa Fire crews responded again around 5 a.m. Saturday morning after it was reported a secondary fire had started at the home.

“I can tell you that both fires are suspicious and were not accidental or rekindles,” said Kartinen.

The home was determined to be a complete loss following the second fire.

Stay with The Bee for updates on this developing story.