The Jerry Ambrose Veterans Council, a 501(C)(3) Public Charity, has established Operation 6, a coalition of various organizations and dedicated individuals from throughout the county to support and rehabilitate homeless veterans and point other vets and their families in the right direction when seeking assistance.

“This is a ‘Hands Up’ program,” said JAVC President Pat Farrell. “They have to want to help themselves and admit they have a problem.”

Operation 6 is headquartered in the Arnold Plaza building at 312 Oak St. in downtown Kingman. JAVC purchased the building, which sat dormant and abandoned for years, from the county in 2017. The building is still being renovated and all asbestos has been removed. The program hasn’t officially started, but the doors are open with a staff of veteran service officers, volunteers and interns standing by to help however they can.

Arnold Plaza is almost literally in the center of downtown and surrounded by an armful of resources.

“That’s why we picked this location,” Farrell said.

Veterans seeking assistance must be able to provide proof of military service with a DD-214 or VA Healthcare card. Operation 6 VSO’s also have ways of verifying service.

Programs are available for men and women. Farrell said women often have different needs such as childcare and sexual trauma counseling. Operation 6 will not help registered sex offenders or those with a sex offender background.

Many homeless veterans suffer from the effects of drug and alcohol abuse – especially opioid addiction. A huge requirement for assistance is to be willing to admit having problems in the first place.

“We need to remove the barriers first,” Farrell said. “We need to get them cleaned up and they have to want to help themselves.”

Mental and physical assessments will be administered to veterans once admitted to the program. VSO’s will then help them look for employment, housing and possible benefit entitlements.

Most of Arnold Plaza is still being reworked. Plans for the 22,000 square-foot building include 16 to 25 apartment-style units with six more rooms designated for opioid clients. Schematics also include a day room and conference room as well as offices for staff and service providers.

More than 30 organizations and individuals have donated money toward the cause.

“Every penny of it goes back into this building,” Farrell said.

Funding has been secured for current renovations and operations. Keeping the doors open will be the real challenge.

“If we don’t figure this out, we’re going to have a lot of veterans back on the streets,” Farrell said.

The Arizona Department of Revenue has accredited JAVC as a Qualified Charitable Organization. Taxpayers wanting to keep their money in Mohave County can get tax credits for financial contributions to the organization.

Operation 6 is still in the infancy phase. Doors unofficially opened July 1 and Farrell is shooting for a July 4, 2019 grand opening. Until then, veterans can stop in and get information.

Arnold Plaza has sat unoccupied and crumbling for years. It was once home to county offices that have since moved to the newer administration building on Beale Street. The bland façade has now been painted with a few specks of red, white and blue, a mural of a U.S. Marine saluting the American flag and a ‘Welcome Home’ banner above the main entrance.

“People can see what were doing,” Farrell said. “We get assistance calls every day.”

The doors are open with a volunteer standing by 8 a.m. to 8 p.m., Monday through Friday. Expect 24/7 assistance when the facility officially opens.

Operation 6 is something Farrell wants to see cure a huge social problem.

“I’d like to see us run out of homeless vets and go out of business,” he said. “Until then, we’re going to work on getting them what they’ve earned through their service.” 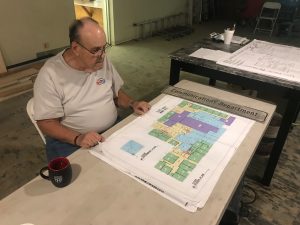 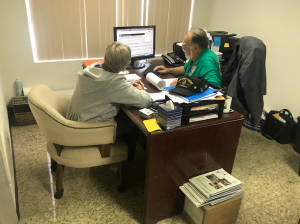 We have a new app! “Bee” one our reporters and get rewarded

The Bee News Media has launched its own app into the PlayStore for Android phones and App Store for Apple Devices. ...