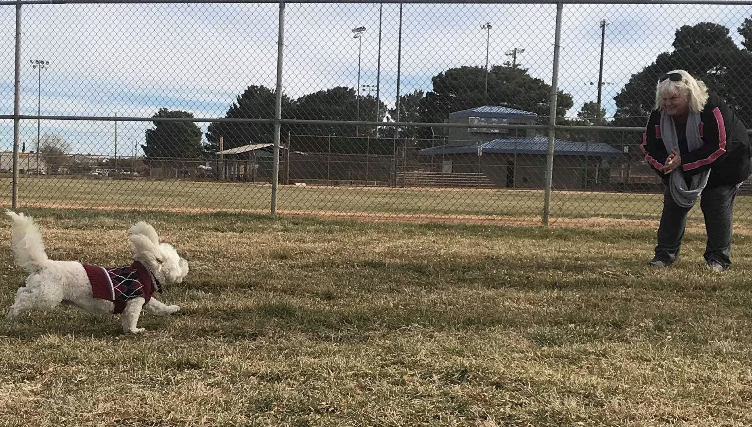 A local resident plays with her pooch at the new off–leash dog park in Kingman. AARON RICCA/The Bee

KINGMAN – Dog owning patrons who’ve been itching to take the pooches to Kingman’s biggest park can now do so – no leash required.

The City of Kingman Parks and Recreation Department officially opened the gates to a 37,000 square-foot dog-friendly off-leash park on Tuesday morning in front of a tail-wagging audience.

The Centennial Dog Park has been in the works for a few months, mainly due to what could’ve easily been overheard by those attending the opening:

Mayor Jen Miles and City Manager Ron Foggin were on hand to witness the ribbon cutting.

“We’re dedicated to opening more parks, so people can exercise and socialize,” Miles said, after seeing a handful of Kingman residents and their dogs run through the new park. “This is a really good thing.”

City ordinances prohibit dogs at Centennial Park, much to the dismay of Kingman residents who use the trails and ballfields on a regular basis. A dip into the city’s general fund allowed for the renovation of the nearly-acre large chunk of park, which sits adjacent to Burbank Street between the Mohave County Library Kingman branch and Kingman Academy of Learning.

“The plot was already there,” said Mike Meersman, Parks and Recreation Director for the City of Kingman. “We just had to add to it.”

For those worried about stray balls from the softball fields hitting into the park, don’t sweat it. The city added an extra layer of fence to the one already in place.

There’s a portable bathroom and a few picnic tables to enjoy the day out. On a quick note: bring your own water this time of year. Due to freezing temperatures, the water may be turned off to prevent broken pipes.