Portal To A Lost World 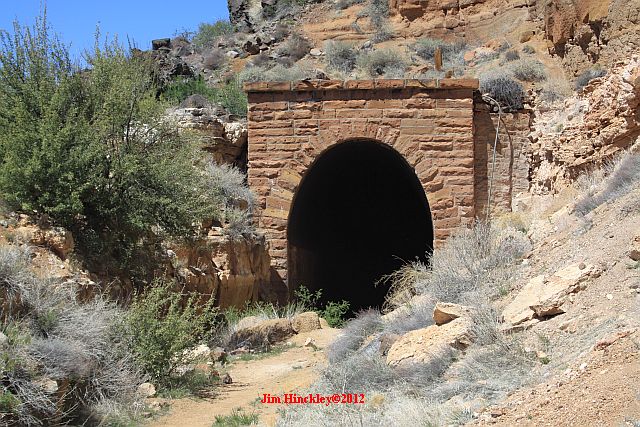 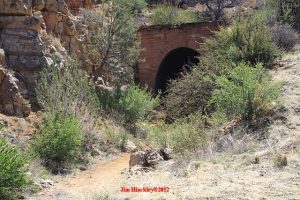 a military outpost was established to protect it. Two decades before Arizona moved from territory to statehood it was front and center in the creation of an engineering marvel. By the dawn of the 20th century it had developed an infamous reputation for death from industrial accident, wrecks, and even murder. Today, the Johnson Canyon railroad tunnel east of Ash Fork, Arizona is less than an obscure footnote to history. Befitting that status as a lost time capsule it stands as a silent monument secluded deep in the Arizona wilderness.

The history of the tunnel is often conflicted as far as exact dates are concerned but the story begins in 1881 when the Atlantic & Pacific Railroad was faced with a challenge almost as daunting as bridging Canyon Diablo. The western escarpment of the Colorado Plateau dropped precipitously with only steep, rugged canyons providing access to the rolling plains below. A survey expedition declared Johnson Canyon as the best option and construction soon commenced. To maintain the maximum grade of descent, 3%, required carving a shelf from the canyon wall, bridging two gorges that exceeded 100 feet in depth, and boring a tunnel though a shoulder of rock at crucial curve.

Soon a rough and tumble railroad camp complete with saloons and brothels had appeared on the flats more than one hundred feet above the proposed tunnel. With unheard of wages – $2.40 a day for laborers, $2.80 a day for drillers – the camp became a hotbed of unsavory characters. In February of 1882, the Arizona Weekly Miner published in Prescott noted that an alcohol fueled argument resulted in James Casey shooting William Ryan in the head and neck. Casey then fled to a neighboring saloon where he barricaded himself. Enraged residents of the camp stormed the saloon with predictable results. “Luckily a ball from one of the guns ended his villainous career and he was sent to meet his maker with the blood of Ryan fresh on his hands. Both men were buried Thursday …”

These were not the first deaths associated with the Johnson Canyon tunnel. In August of 1881, a premature explosion killed six men. As construction fell behind schedule and costs began to mount, the Atlantic & Pacific entered a limited partnership with the Atchison, Topeka & Santa Fe railroad. Eventually the Santa Fe would absorb the Atlantic & Pacific. The bore was completed in 1882 but it would be months before the tunnel was tracked and the trestles to the west were completed. One of the preparatory projects was shoring the ceiling with timbers one foot thick. In 1893, and again in 1898, fire in the tunnel resulted in closure of the main line and death. To resolve this recurring issue, the tunnel ceiling was lined with riveted boiler plate. The sharp curves and steep descent could not be resolved quite as easily. As a result, wrecks soon gave the canyon an infamous reputation. 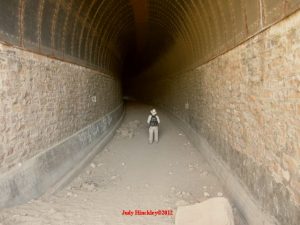 Shortly after World War I, the tunnel floor was lowered to accommodate larger rolling stock. This would be the last major renovation in the tunnel before the entire line through Johnson Canyon was replaced in 1959 by a modern double line several miles to the north. Indicative of its importance, and the bottle neck the canyon represented, is found in the fact that during World War II the tunnel was deemed a vital war asset, and an observation and sentry post was built on site. The remains of this remote outpost are also part of the time capsule that is the Johnson Canyon tunnel.

Surprisingly, I was unaware of this amazing place and its role in Arizona history until last spring. From then until now, I have developed a deep fascination for this place and an eagerness to see it, to experience it, to embrace the solitude of this marvelous place that is a tangible link to the earliest history of the Arizona territory.  So, late Sunday evening my dearest friend and I decided that as it had been a full month since our last major expedition, and as the weather was almost perfect, it was time for an adventure. The destination remained an unknown until early Monday morning.

So we prepared a lunch of kippers and crackers, peanut butter and jelly sandwiches, grapes and granola bars, loaded the ice chest, and filled my day pack with camera gear, lunch and a few essentials we hoped to never need as they are for emergency only, and set our sights on Johnson Canyon. As we were unsure of how much time would be required for the adventure, we put aside the luxury of a Route 66 cruise and followed I-40 east to Welch Road, exit 151. We continued north on Welch Road, also forest service road six, through the rolling hills studded by junipers, along a segment of pre 1931 Route 66, and past an incredible sink hole to the forlorn remnants of Welch Station and the old rail bed, a drive of less than six miles from I-40.

The rail bed was in surprisingly good condition but as discretion is often the better part of valor I parked in a wide spot about a half mile from the site of Welch Station. My concern was that the road bed, still in excellent condition, appeared to offer little opportunity for turning around as it climbed into the confines of the canyon. As it turned out my concerns were justified but just a bit premature. A half mile from where we parked, a narrow defile is spanned by a wood and steel bridge that seemed to be defying gravity. Obviously it had been used by folks with ATV’s but a full size vehicle such as the Cherokee was another matter.

The second obstacle was of even more concern. Shortly past a deep cut the road bed had washed away leaving a narrow ribbon with unstable ground on both sides and a steep drop into the canyon below. So, we walked. At every turn we were awarded with stunning views of quintessential western landscapes and vestiges that provided tangible links to almost a century of railroad engineering evolution. A large bull snake gave us a bit of a start but most of the wildlife encountered were bold rock squirrels, rabbits, and a wide array of birds and butterflies. It was an unseasonably warm day and even near the 6,000-foot level there was little respite from the heat. Then as we followed a sweeping curve around a rock shelf, we were awarded our first glimpse of the dark maw of the tunnel framed by a stunning display of the stone masons art. Here was the legendary Johnson Canyon railway tunnel.

Considering its history there was a sense of solemnity as well as awe as we climbed over the debris at the tunnel entrance and entered the cool darkness. As my eyes adjusted to the light after hours spent in the bright sunshine, I could see the faint hint of light at the far end around the curve. The sheer size of the edifice was almost spellbinding.  Our initial plan had been to follow the rail bed to the head of the canyon. However, as it was now late afternoon, and as we had a hike of two or two and a half miles back to the Jeep and the long drive home, we decided to follow the tunnel as far as the east entrance, and then find a place for lunch before making the return trek.

There was simply no more time for further exploration. The urge to see the rest of the canyon, as well as search for remnants of train wrecks in the canyon below and explore the old segment of Route 66, will serve as adequate incentive for a return trip or two. And so, our grand adventure to Johnson Canyon ended far too quickly. To round out a perfect day, we decided on another picnic along old Route 66 near Williams, and then a drive home along that storied highway from Crookton Road to Kingman.

← Prev: Where Dinosaurs Roam Next: Beat The Heat With A Bradshaw Mountains Adventure → 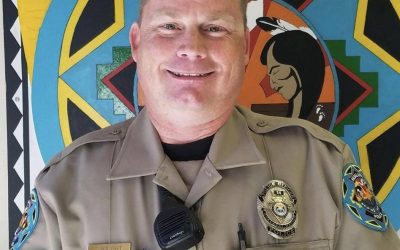