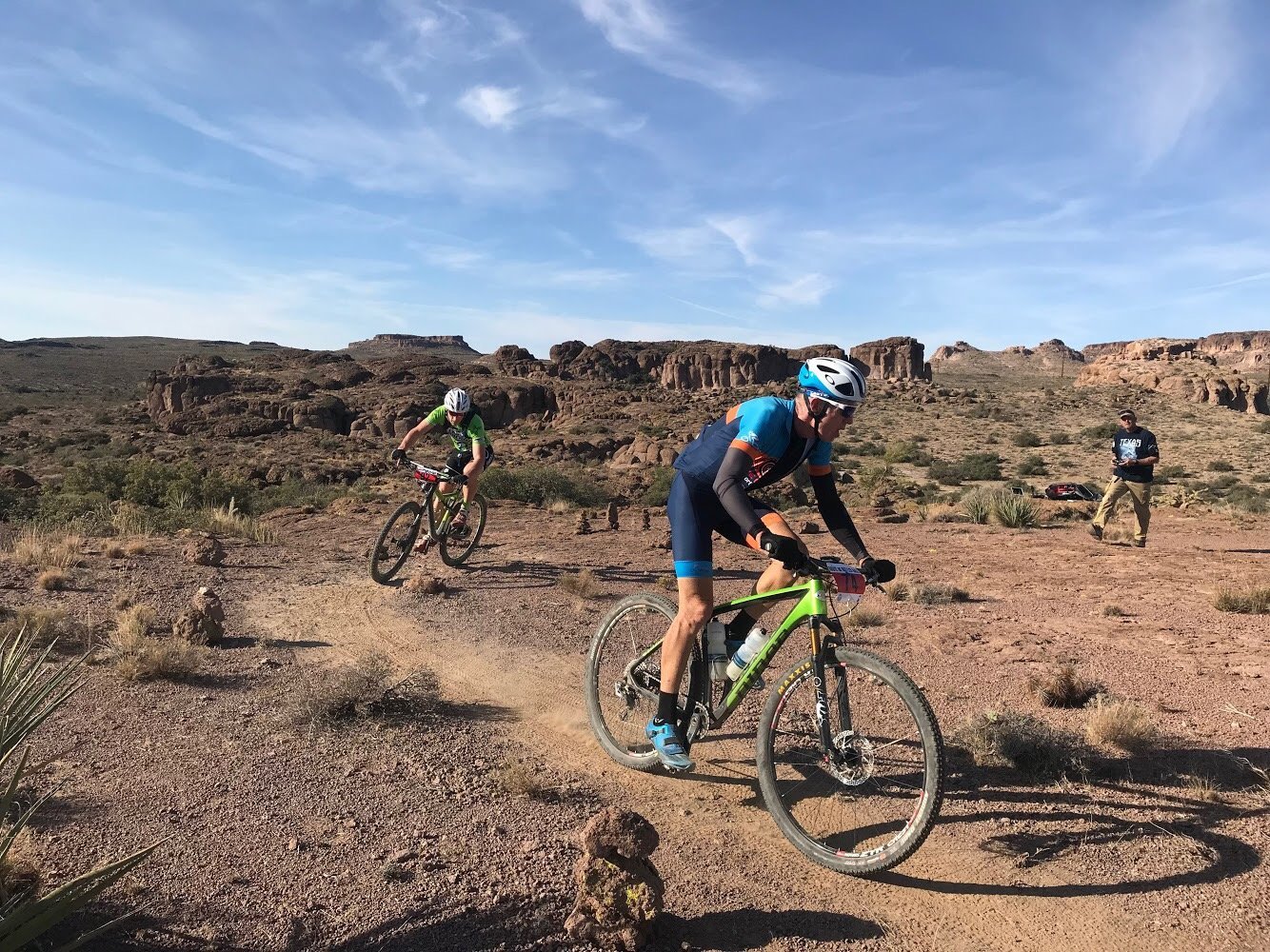 Riders traversed anywhere from 11 to 32 miles of roads and trails in Kingman and at Cerbat Foothills Recreation Area. AARON RICCA/The Bee

KINGMAN – Nearly 100 mountain bikers, their friends and families spent a pleasant Saturday afternoon riding the roads and trails in and around Kingman.

The 6th Annual Rattler Race was in full effect despite heavy rains that wrecked trails at Cerbat Foothills Recreation Area in October.

The Colorado River Area Trail Alliance has organized the event for years and within a month went from a state of shock and panic, to fixing the trails (with the help of the City of Kingman and Mohave County public works departments and Bureau of Land Management) and rescheduling the race with hopes it would be a success.

According to CRATA race director and founding board member Denise Myers, it was.

“Everything considered, we’re thrilled everything has ran smoothly today,” she said.

CRATA made a big change to the course this year. They worked with the city to start and end the race at the Kingman Gateway Arch on Beale Street and commandeered Metcalfe Park as a hub for race registration and post-ride festivities that included live music and vendors.

The race began at 9 a.m. with riders in different categories conquering various distances ranging from 11 miles to 32 miles. Most of the riders and spectators stuck around in the park until nearly 3 p.m. while others moseyed to downtown businesses that were sponsors offering discounts for race participants.

Temperatures were in the 60s for most of the day and winds non-existent. Those conditions combined with the new starting line and course additions made many riders happy.

“The venue change has been epic,” said Mike Slettebo, a member of the Lake Havasu High School mountain biking team.

Although the team isn’t officially recognized by the Lake Havasu Unified School District, that doesn’t stop Slettebo from bringing student riders to the CFRA trails about 12 times a year.

“This route has an excellent flow to it,” he said. “The pavement gives us time to warm up and the transition from starting (downtown) instead of Coyote Pass is like night and day.”

Diversity played a strong part in the success.

Riders ranged from ages 9 to “old” as one racer listed as his age. Their homes of record included everywhere from Kingman to the greater southwest and even one or two Midwesterners—East Coasters.

There were plenty of women and kids blazing through the trails and the makeup of volunteers and local government elements made everything come together.

Along with the City of Kingman Parks and Recreation and BLM, the Kingman Police Department, Mohave County Sheriff’s Office, MCSO Search and Rescue and other county departments all pitched in to see the event run as smoothly as possible.

“It will showcase the town, community, and the BLM involvement to improve our trail system,” said CRATA member Edwin Mann earlier this week. “(The race) will also bring some people in who’ve barely left the interstate to discover Kingman’s charm.”

It’s looking like 2019’s Rattler Race will be more of the same and then some.

“Everyone I talked to said not to change a thing,” Myers said.