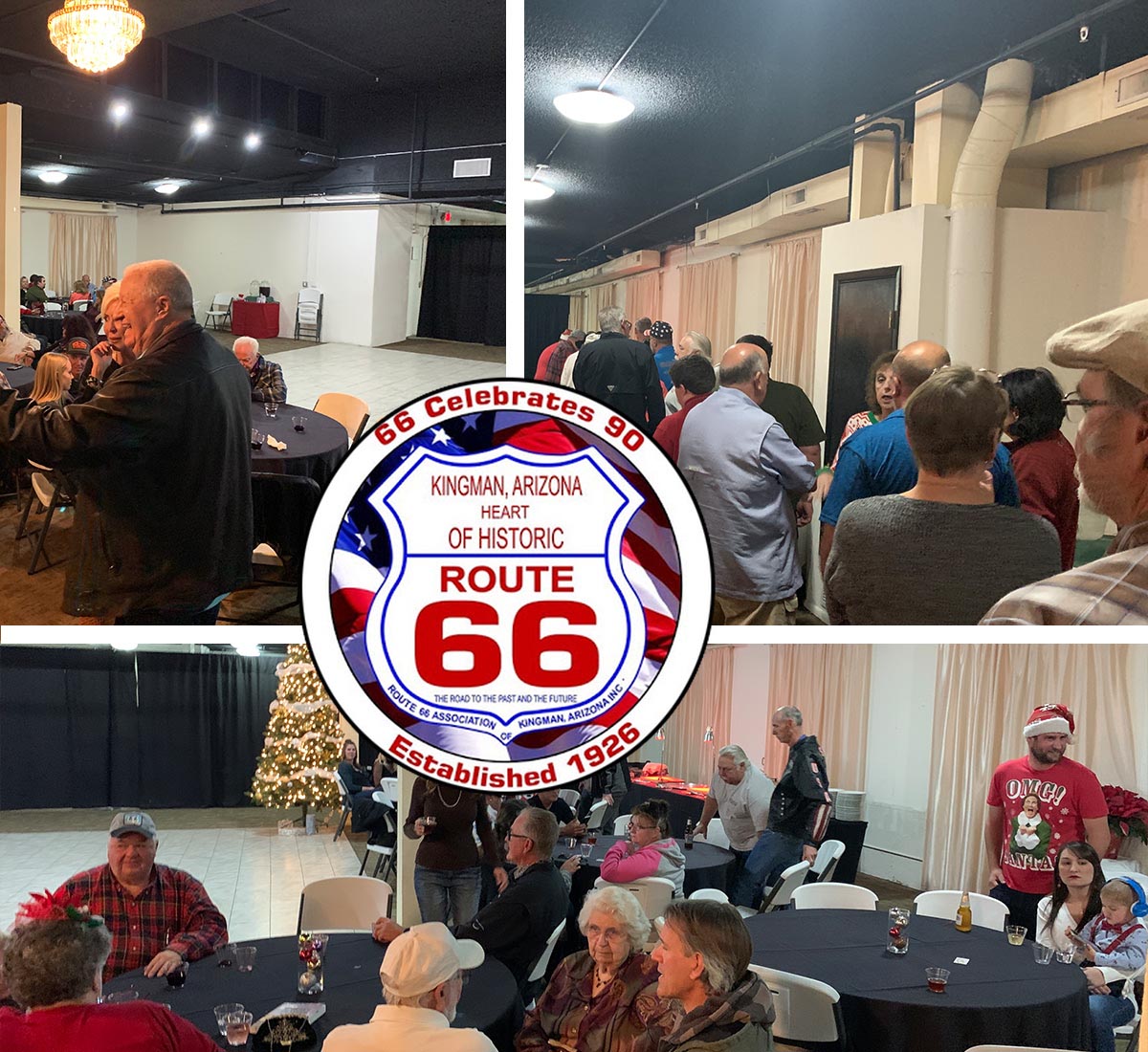 On the evening of December 11, 2019, the Route 66 Association of Kingman celebrated its 25th anniversary with a “meet & greet” and a dinner of smoked suckling pig and turkey at the Grand Event Center in Kingman, Arizona. Open to the general public the event showcased the organizations ongoing efforts to build a sense of community, community purpose and to build cooperative partnerships.

Since its inception the association has been a leader in the creation of murals and public art in Kingman. The murals on the historic water tanks along Andy Devine Avenue (Route 66) and the American Legion building are but two examples. The organization has also helped business owners with façade renovation, acquired and contributed funds for the restoration of neon signage, subsidized Kingman area promotional initiatives, helped nonprofit organizations fund new signage and contributed to community dinners on Thanksgiving. Unlike the Historic Route 66 Association of Arizona and some other Route 66 associations, the Route 66 Association of Kingman is not dependent of grants or state subsidy as it is entirely funded by annual memberships.

The organization was established by Scott Dunton Sr. and author Jim Hinckley. The Dunton family has a long association with Route 66. N.R. Dunton operated a garage and towing service in Goldroad, Arizona from the 1920’s into the 1940’s, built Cool Springs in 1926 and established Dunton Motors in 1946. Roy Dunton was the namesake for the iconic Mr. D’z Route 66 Diner, formerly the Kimo Café that opened in 1939. Scott Dunton Sr. is currently the president of the Route 66 Association of Kingman, and the owner/manager of Dunton Motors Dream Machines, the dealership established in 1946.

Hinckley is the author of nineteen books and the creator of the Jim Hinckley’s America travel network. He is also a consultant specializing in the creation of tourism related marketing and promotional initiatives and assists companies with the development of Route 66 tours. Counted among his clients are the City of Cuba, Grand Canyon Caverns, Nissan Canada, New Zealand based Gilligan’s Route 66 Tours and Australian based Route 66 Tours. Though no longer a board member with the association, Hinckley continues to provide promotional services for the organization and to facilitate events such as the recent reception for the Dutch Route 66 Association.

For 2020 the association plans to host a monthly “meet & greet” to foster greater awareness of Kingman area promotional opportunities, and to facilitate development of cooperative partnerships. There are also plans for the hosting of receptions for organizations and groups, assisting with development of promotional initiatives, and additional public art projects.

For more information about the Route 66 Association of Kingman:

← Prev: $5.2 Billion expansion of the “The Hive” Next: Area Children Shop With A First Responder →