Separating Fact From Fiction – Part One

Legend has it that the founding of the town immortalized in a little ditty from Bobby Troup about a highway signed with two sixes  traces its founding to California bound pioneers  traveling the Beale Wagon Road who stopped to wait for the wind to quit blowing. People who broke down there on their way to someplace else ensured a rather steady increase in population in the century that followed. 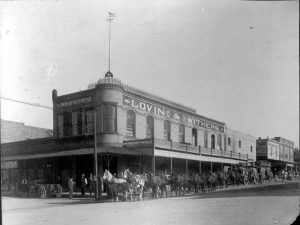 The truth is that for at least a half millennia people have been passing through on the way to somewhere else,  and for more than a century a few travelers did break down, set up camp, and in time, called Kingman home. Today people still zip through town on the way to somewhere else. A few stop for fuel or food, or to rest after a long day on the road. A few, however, have discovered that Kingman is more than a roadside oasis. They have discovered that it is a gem of the Mother Road, a Route 66 treasure hidden in plain site.

The true story of Kingman and its origins begin with nomads and adventurers, dreamers and fortune seekers, a desert oasis, and a railroad. It continues with tales of mayhem and celebrities, epic disasters and headline grabbing events, and a highway signed with two sixes that became an American icon. An abundance of springs that provided dependable sources of water year round made the foothills of the Cerbat Mountains a haven for clans of the nomadic Hualapai people long before Father Garces camped at Beale’s Spring during his exploratory expedition in 1776. In the decades that followed, that spring, the ones in nearby Johnson Canyon, and other springs in the Cerbat, Black, and Music Mountains would prove to be an invaluable oasis for adventurers, soldiers, and pioneers. They would also be a point of contention between the native peoples and the ever rising tide of miners, ranchers, and opportunistic entrepreneurs, and the cornerstone for the founding of a town that would one day be proclaimed the Heart of Historic Route 66.

Legendary mountain man Jedediah Smith was among the first of the American adventurers to explore this wild desert wilderness that embraced the Colorado River Valley. However, in spite of persistent rumors that he camped within the bulwarks of Warm Springs Canyon in the Black Mountains near present day Yucca, historic evidence indicates that he only followed the dusty sandal prints of Father Garces in the land of the Mojave along the Colorado River.

To facilitate improved transportation and communication between the  states nestled along the east coast and the Mississippi River and the newly acquired territories that are known today as California, Arizona, and New Mexico, Captain Lorenzo Sitgreaves was tasked with leading an expedition of naturalists, artists, topographers, teamsters, and an armed escort of thirty infantrymen from the Zuni Pueblo to the Colorado River and then south to Camp Yuma. As an historical footnote Sitgreaves is the namesake for the pass in the Black Mountains of western Arizona on the pre 1952 alignment of Route 66 between Kingman and Oatman. To a large degree Sitgreaves followed the course charted by Father Garces who had traveled a Native American trade route that connected the Zuni Pueblos and the villages of the Hopi with tribes on the coast.

The expeditions of Francois Xavier Aubry in 1853 and 1854 also followed along the 35th parallel in northern Arizona However, they did more than add to the knowledge garnered during the Stigreaves expedition; the media spotlight that followed the exploits of Aubry encouraged people to see the course across the hostile desert wilderness as a viable means of reaching the promised lands of California. To say that Mr. Aubry was a colorful individual would be akin to saying that Kingman in western Arizona (the crossroads of the past and future that is the subject of the subject of chapter two) gets a bit warm during the weeks of August. Born in Quebec in 1824, Aubry immigrated to St Louis while still in his teens. It was here that he began learning the tricks of the merchant trade. It was also where he borrowed money shortly after the outbreak of the Mexican-American War and entered the dangerous but potentially profitable Santa Fe trade.