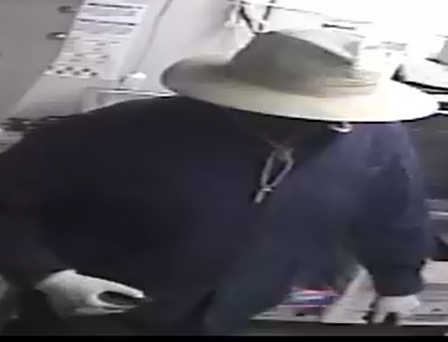 GOLDEN VALLEY–Authorities are searching for two male suspects accused of robbing a gas station Sunday morning in Golden Valley.
Mohave County Sheriff’s Office deputies responded to a gas station in the 5400 block of Highway 68 around 5:30 a.m. Sunday in reference to a robbery.
A store employee informed dispatch she was robbed by two male subjects. Deputies arrived on scene and made contact with the female reporting party, and conducted a sweep of the store to confirm no one was inside the business.
The employee stated both men entered through the front door of the business. The men took money out of the register and had the employee go inside the store’s freezer while they exited the store.
The two male subjects were described as wearing full brim hats, gloves, jackets, and had their faces covered.
One male was described as being between 5’8” to 5’11” and the other being 6’1” to 6’4” in height. The men left with an undisclosed amount of money.
Anyone with information about this incident are encouraged to contact Mohave County Sheriff’s Office at 928-753-0753 or call our toll free number at 1-800-522-4312.
← Prev: Train Crash Leaves One Dead, One Injured Next: Medical Examiner Rules Jeremy Duncan's Death Accidental →