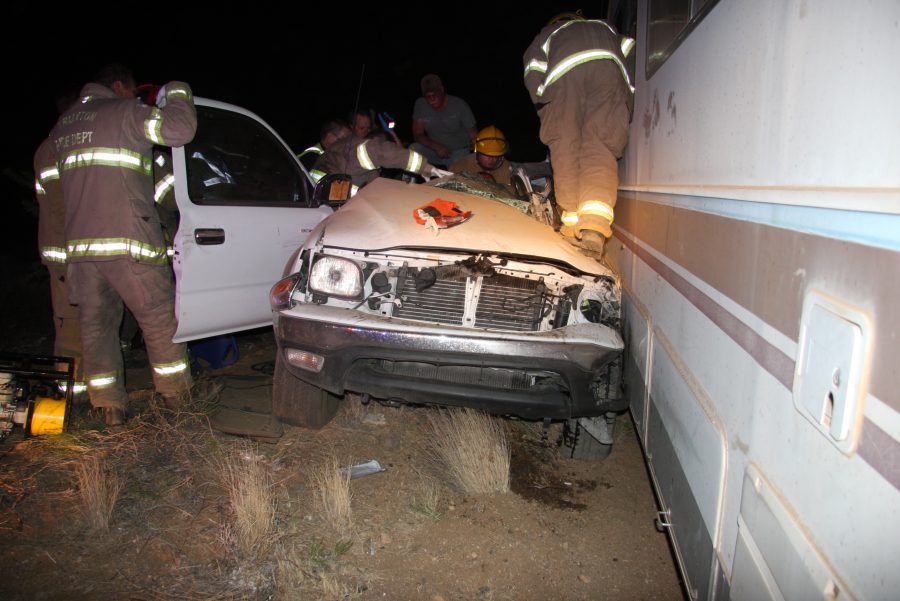 KINGMAN–A teen sustained serious injuries Tuesday night after being struck by a motorhome that reportedly broke free from a tow strap.

Kingman Police Deputy Chief Rusty Cooper said the accident happened shortly after 8 p.m. in the 5400 block of North Stockton Hill Road. Police had received reports of a serious head-on crash and arrived on the scene finding the 17-year-old driver of a white Toyota Tacoma suffering from serious injuries. The teen had to be extricated from the truck via the roof by emergency medical personnel. He was taken to Kingman Regional Medical Center before being airlifted to University Medical Center in Las Vegas for further treatment. He is currently listed in stable condition.

Cooper said further investigations reportedly determined that an older model motorhome was being towed by an older model brown Dodge Dakota southbound Stockton Hill Road, entering city limits. At some point, investigators believe the tow strap broke, which caused the motorhome to roll out of control. The motorhome veered into the northbound lane and into the path of the Toyota truck, colliding almost head-on.

The driver and passenger of the Dodge reportedly gave investigators conflicting accounts about the accident and other witnesses reported noticing a man walking away from the crash. It is believed the man had been steering the motorhome while it was being towed, said Cooper.

No arrests have been made at this time, said Cooper. However, possible criminal charges of false reporting to police, endangerment and unsafe towing may be expected.