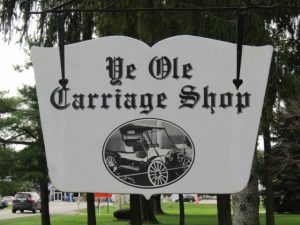 Just a block or so off state highway 60 in Spring Arbor, a few miles west of Jackson, Michigan, there is an unassuming building that covers nearly a full square block. A simple sign out front reads, “Ye Ole Carriage Shop.”

The building is actually a vault, a time capsule and a treasure trove all rolled into one. Housed inside is a sprawling collection that preserves the diverse history of the auto industry in Jackson that in the first decades of the 20th century included more than 25 manufacturer’s. Lloyd Ganton has spent decades acquiring these relics. Some of the cars on display are literally one of a kind. And others, like a number of Briscoe built cars, are nearly forgotten even though they were once quite popular.

Briscoe built automobiles were the namesake of Benjamin Briscoe, the man who gave David Buick his start in the auto industry. He is a forgotten pioneer that transformed the American automobile industry.

Benjamin Briscoe had correctly assessed the state of the America auto industry in late 1907 when he formulated a plan to dominate the market through the merger of major manufacturers and the creation of a new corporation. As envisioned, by merging Olds, Ford, Maxwell, and Buick, this company would provide a car and truck for every budget

The planned merger was still born. And so he created the United States Motor Company with Maxwell-Briscoe as the cornerstone. William Durant countered with the creation of General Motors using Buick as the cornerstone. The ensuing battle between the conglomerates to acquire companies that manufactured automobiles and ancillary components was ill conceived. Both companies were nearly decimated.

In late 1910, Briscoe diversified the company through creation of United Motors International, Ltd. to handle international sales of the vehicles manufactured under the United States Motor Company umbrella. The initial sales focus was on the British commonwealth. To entice investors a company prospectus in 1911 noted that United States Motor Company had eighteen manufacturing facilities with a combined floorspace of 49 acres, had 14,000 employees and was projecting production of 52,000 vehicles for 1912. A claim was also made that sales were up fifty-seven percent from the previous year.

The reality was not quite as rosy. The company was deeply in debt and seriously overextended.  As a result, in 1912, the company went into receivership and the banks appointed Walter Flanders as manager for the receivers committee to oversee reorganization. In 1913 the company was reborn as Maxwell Motor Company and operations were centralized at Highland Park, Michigan. As per the terms of the reorganization, all association with Benjamin Briscoe was severed.

Durant’s vision and management style were different from Briscoe’s, but the result was the same. In its first two years, Durant used General Motors to knit together thirty companies including Buick, Oldsmobile, Cadillac and Oakland, and numerous parts manufacturers. But, overextended and deeply in debt, in 1911 the board of directors forced Durant to quit the company. 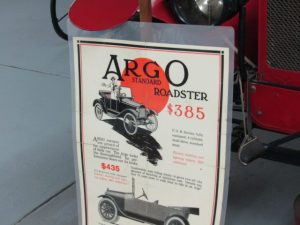 The loss of the United States Motor Company marked Briscoe’s first major defeat. It would not be his last. Within twelve months of his departure he had established Briscoe Freres with a manufacturing plant for production of the Ajax cyclecar in Billancourt, France to design and manufacture an automobile “built by American methods.” The company enjoyed moderate success put production ceased when the factory was converted to the manufacturing of artillery shells during WWI. By this time, however, Briscoe had limited his association with the company, returned to the United States and launched other enterprises.

The first endeavor was the Argo car, an American version of the Ajax manufactured in Jackson, Michigan. However, by the time he was ready to initiate serious production the cyclecar craze had evaporated. So, he established the Briscoe Motor Corporation, with a factory in Jackson, Michigan.

In October of 1915, just a year after the launching of the company, with the help of Tom Storey a director of the Brockville Atlas Automobile Company in Ontario, Canada, Briscoe launched a major expansion of Briscoe Motor Corporation to form the Canadian Briscoe Motor Company. This would prove to be a short-lived endeavor that hindered development of the stateside Briscoe automobile.

The 1915 Briscoe was promoted as “The First French Car at an American Price.” Except for a single headlamp faired into the radiator shell there was little in appearance to differentiate the Briscoe from dozens of other vehicles produced at the time. It was powered by a 33-horsepower four-cylinder engine and the Cloverleaf roadster model featured compressed, laminated papier-mache body panels over wood framing. The first-generation Briscoe sold for a relatively modest $750 but this did not include optional top or windshield or starter. 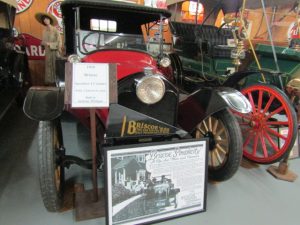 Rather than invest in innovative development Briscoe relied on catchy gimmicks and marketing. As an example, for 1916 he offered two engine options, a slightly improved four-cylinder engine or a Ferro manufactured V8. Brochures and advertisement noted, “Buy the Four. Use it a month. If then you decide you want the V8, simply pay the difference and a small charge for installation work. Later that year the V8 engine was dropped and, in its place, a four cylinder, 24-horsepower, air-cooled engine was offered as an option.

Sales were relatively anemic with only 8,100 vehicles built in 1916, the company’s best year, but Briscoe was a man with ideas. After WWI he returned to France and attempted to find investors for a company that would offer any community an opportunity to become a center of automobile manufacturing through the purchase of easy to assemble plans, Briscoe engines and Bellanger chassis. The idea was stillborn.

The final gasp for the Briscoe Motor Corporation came in 1920. Working with his chief engineer Jules Haltenberger, Briscoe devised a radical plan for simplifying the manufacturing process and thus reducing the cost. These plans included a reversable propeller shaft, a single design for all spring shackles, one size bolts to be used in all suspension components, identical clutch, and brake pedal castings, and one drill/bolt size for the chassis. Production was simplified but at the cost of durability.

In mid-1921, Briscoe sold the entire enterprise to Clarence A. Earl, a Jackson industrialist. Earl continued building cars with parts on hand through the end of 1922 and sold them under the Earl name.

This would be the end of Benjamin Briscoe’s automotive endeavors. However, it was not the end of his ambitions or dreams. Before his death he would  launch a Canadian company that refined crude oil with a process that he had invented, and fund gold mines in Colorado before retiring to an estate in Florida where he experimented with development of hybrid fruit trees.

Even though not all his endeavors were successful, Benjamin Briscoe was truly an automotive pioneer. In light of the fact that he can be credited with playing a pivotal role in the launch of Buick and General Motors, and Chrysler as that company was built on the foundation of Maxwell-Briscoe, his obscurity today is rather surprising. 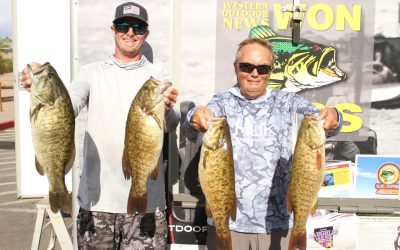