Theft Arrest leads to Drugs and a Homemade Explosive Device 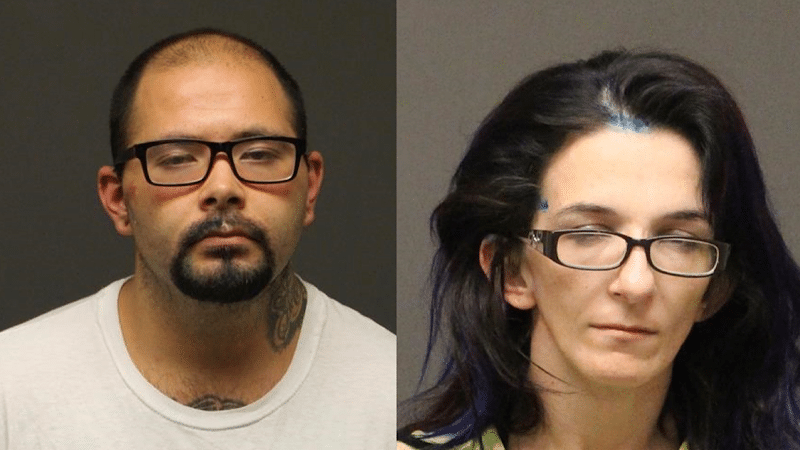 On Thursday (9/23) at 8 PM, Mohave County Sheriff’s Office Deputies were called to a business in the 5200 block of Highway 95 in reference to a suspected shoplifting in progress. Deputies responded to the scene and met with Asset Protection staff and observed the involved parties on video. A male subject, later identified as Tyler William Reid, 26 of Las Vegas, and Karissa Lynn Barber, 32 of Las Vegas, were observed placing items inside a toolbox, attempting to conceal them.

Deputies observed Reid and Barber push two carts full of items to the self-checkout center. Before the items had been paid for, Reid began pushing one of the carts out of the building. Reid was approached by deputies in the parking lot and asked for his ID. Deputies noted that Reid began reaching behind him and deputies observed what looked like the handle of a gun in his pocket. Deputies took control of Reid’s hands and removed the weapon, a BB gun, from his possession.

Asset Protection staff exited the business with Barber and advised that her card payment had been declined. AP staff advised the merchandise removed from the business was worth approximately $2,165.00. Both subjects were detained and searched, where deputies located a black pouch with 30.7 grams of methamphetamine in Reid’s pocket. Both subjects attempted to lie about their identity by giving false information to deputies.

AP staff requested their vehicle be removed from the property and a records check revealed the vehicle to be stolen out of Las Vegas. A search of the vehicle revealed multiple items of drug paraphernalia, multiple prescription bottles containing pills, usable amounts of heroin, Narcan, multiple syringes, and what appeared to be a homemade explosive device. Lake Havasu City Police Department EOD responded to the scene and took possession of the explosive device.

Tyler William Reid was charged with Theft, Shoplifting, Theft of Means of Transportation, Possession of a Weapon by Prohibited Person, Dangerous Drug Possession, Dangerous
Drug Possession for Sale, Narcotic Drug Possession, Drug Paraphernalia Possession, all felonies, Failure to Mark Explosives, and Prescription Drug Possession, all misdemeanors. During a later search of personal items found in the vehicle, deputies learned that the name given by Reid at the time of arrest was an alias. A fraudulent check and personal identification of unknown subjects were also located. Barber was additionally charged with felony Forgery. Reid was additionally charged with Forgery,
Taking the Identity of Another, and Obstructing a Criminal Investigation, all felonies. This investigation is ongoing.