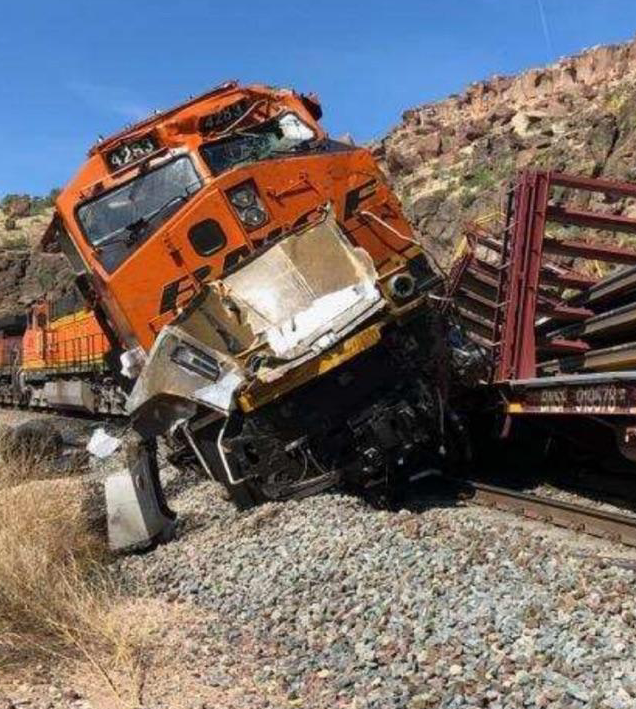 TRUXTON–A train crash has claimed the life of a Kansas man after a collision occurred on the train tracks northeast of Kingman.

How the two trains were on the same track remains a mystery at this point. The National Transportation Safety Board is currently investigating the accident. A report will be released publicly following the completion of the investigation.

Multiple agencies were dispatched to a remote canyon area outside of Truxton, Arizona, which is 41 miles northeast of Kingman on Historic Route 66.

Mohave County Sheriff’s spokeswoman Anita Mortensen said deputies from her agency were dispatched to the scene around 3 p.m. and arrived to find a Burlington Northern Santa Fe train with significant front end damage. The other train, belonging to the Herzog Railroad Services, had been derailed. Herzog is a company that provides maintenance to the railroad.

The equipment train had reportedly been pushed off the tracks by the BNSF train, said Mortensen.

Walter Erickson, 63, of Lenexa, Kansas was found deceased on the scene. Another Herzog worker, Matthew Thompson, 26, of Salem, Missouri was airlifted from the scene to University Medical Center in Las Vegas, Nevada with serious injuries. He is currently listed in stable condition.

A source close to the incident told The Bee on Tuesday that the two Herzog employees were based out of Needles, California and were westbound from Winslow, Arizona before the crash.

All occupants of the BNSF train were accounted for and no other injuries were immediately reported, said Mortensen.

Mohave County Sheriff Doug Schuster expressed his condolences to the family of the deceased.

This investigation is ongoing.