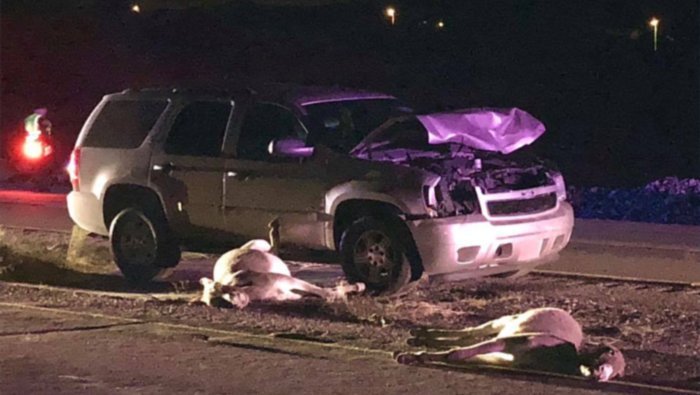 Fromelt said the driver was unable to avoid striking the burros, who were reportedly in the roadway at the time of the crash.

Several social media posts on The Bee’s Facebook page Wednesday indicated the City of Bullhead City charges $10,000 per burro killed to the driver involved in the accident.

Bullhead City Manager Toby Cotter says that is “not true”.

“The City does not charge anyone for hitting a burro,” Cotter said. “In fact, the City responds to the accident and removes the burro at no cost to the person involved in the accident.”

Burros tend to migrate down from the mountains searching for food and water and end up on the roadway. In August, the Bureau of Land Management conducted an emergency gathering of wild burros in hopes of decreasing the population in the Bullhead City area.

BLM spokeswoman Valerie Gohlke said 101 were rounded up and removed in August. It was expected that the round up would gather around 500 wild burros from Bullhead City, Cibola and the Parker Strip regions.

The gathers come after discussions and concerns brought forth by private landowners and community leaders following a string of incidents involving wild burros, said Gohlke.

Driver’s are urged to use caution on the Bullhead Parkway and surrounding neighborhoods during the nighttime, as its very hard to see burros in the night. Unlike deer and coyotes, burros’ eyes do not reflect in the headlights.

Cotter said lighting along the Bullhead Parkway may be considered in the future when the parkway is reconstructed, but that won’t be until around 2021.

“The new Laughlin Ranch Boulevard does have lighting, which should be energized late this week or early next week,” said Cotter.