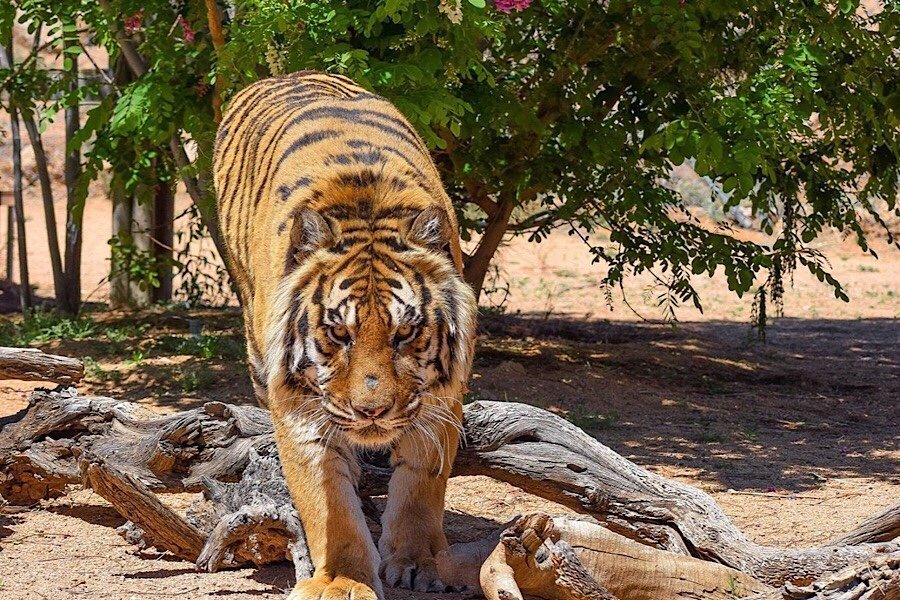 Valentine, AZ – April 24, 2019 – Keepers of the Wild Founder and Executive Director Jonathan Kraft received multiple injuries Monday afternoon from Bowie, a Bengal Tiger. The accident occurred during a Flash Flood Warning period of heavy rain, lightning, thunder and hail. Jonathan was concerned for the welfare of several large cats in his approximate area including the tiger and took unilateral action to allow them access to protection from the elements. During that process, a safety protocol had obviously failed resulting in the incident.

Bowie arrived at Keepers of the Wild in September 2018. He was one of three big cats that were previously owned as pets. Upon arrival at the Valentine wildlife sanctuary Bowie was released into a large habitat. The eleven-year-old tiger had been declawed as a young cub and the procedure resulted in causing progressive lameness to both front feet. Bowie is often observed gingerly limping as he enjoys his new home. Keepers of the Wild’s veterinarian has been monitoring Bowie’s discomfort and regularly evaluates pain control prescriptions to help ease his condition.

To further ease his condition, Bowie had been relocated to a new habitat more appropriate for his condition five days prior to the accident and adapted to his new environment very quickly. Though we do not suspect this had anything to do with the incident it is part of our ongoing internal investigation.

The unusually heavy spring thunderstorm that occurred Monday afternoon prompted Jonathan Kraft to instruct animal care staff to “open” transfer gates for the various animal species to have access to their nighttime den areas. This is the standard policy during extreme weather events. Keepers of the Wild is home to fifty different species/sub-species of exotic and native wildlife. The various habitats occupy over 60 acres of developed land and the big cat species occupy twenty individual areas.

Jonathan has been known for having a heart of a lion due to his compassion and commitment to the hundreds of animals that Keepers of the Wild has rescued over the past 24 years. Since the Monday afternoon accident he now has the heart of a tiger as well. The former Las Vegas illusionist was the first area entertainer to stop using big cats in his performances. He began urging other entertainers to stop and developed Keepers of the Wild to provide a home for exotic animals. His life focus has been to provide the best care possible for former exotic and native species of pets, former performing animals, orphans, permanently injured animals and those that have been confiscated by various law enforcement animal agencies.

Due to the increasing intensity of Monday’s thunderstorm the wildlife sanctuary was closing the park to the public and initiating the standard animal safety procedures. Animal Care staff members work in pairs when opening the various species to their holding and den box areas. Throughout the past 14 years Keepers of the Wild Safety Protocols have been updated and Staff Training has focused on ensuring that park operations has a system to discover, correct and prevent potential non-compliance with the USDA (United States Department of Agriculture) Animal Welfare Act. Though we have very detailed procedure for big cat safety, a slight distraction or error can quickly escalate into a serious situation. We have a triple-gated system and the public was never in danger.

Jonathan made the decision to shift Bowie’s gates to allow him access to his den box area. During the process, the usually docile behaving Bowie exhibited unusual conduct by suddenly pushing the gates prior to Jonathan being able to secure the safety clips. Animal Care staff rushed to assist Jonathan and remove him from the tiger’s grip. Although Bowie lacks front claws, he took advantage of his strong teeth to hold onto Jonathan.

Medical emergency crews arrived on scene and transported Mr. Kraft to Kingman Regional Medical Center. From there he was transported to Las Vegas for further treatment. Jonathan suffered multiple wounds and two broken bones. He will be recovering for several months. Bowie is fine and resting in his habitat and we will not euthanize him because of the accident.

Jonathan stated: “There are many photographs showing me having close contact with a variety of animals when they were young or ones that I had raised. Those are from ‘the old days’. Close contact with wild exotic and native species has not been a practice in many years. My accident with Bowie was my fault. I was concerned for his welfare and did not stay focused on him. It only takes a fraction of a second for a captive wild animal to revert to their instinctual behavior. These situations occur when there is human error.”

Keepers of the Wild is a 501(c)3 non-profit organization dedicated to the protection of abused, neglected, abandoned and retired captive wildlife. Through education and public awareness, we seek to alleviate all animals suffering and help eliminate use of wild animals as pets and their exploitation in entertainment. Keepers of the Wild provides a permanent home and true sanctuary to all the animals it rescues.

We Love. We Care. We Protect.

← Prev: Kingman Area Chamber of Commerce Announces an Interim President/CEO Next: Curfew in effect through Sunday →