BULLHEAD CITY–A head on crash Monday with a school bus sent one woman to a Las Vegas hospital.

The bus was reportedly carrying 34 students from the Sunrise Elementary School when it collided with a red Volkswagen Beetle on the Bullhead Parkway.

The crash occurred shortly before 4 p.m. Monday, said Bullhead City Fire spokeswoman Lori Viles. Once on scene, said Viles, the driver was extricated and airlifted from the scene to a Las Vegas trauma center with unknown injuries.

Both north and southbound lanes were closed while emergency personnel worked the scene.

The children on the bus were evaluated at the scene and no immediate injuries were reported. The bus driver also reportedly escaped without any injures. All the students were placed on a second bus and sent to Sunrise Elementary School, where they were picked up by their parents.

The crash remains under investigation with the Bullhead City Police Department.

This is a developing story. Stay with The Bee for updates. 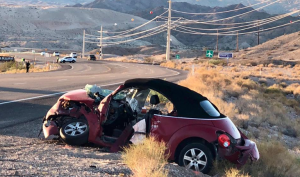 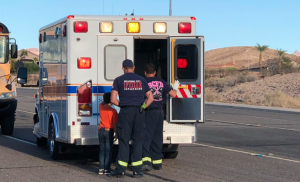