WWII Bomber To Make Stop At IFP In September 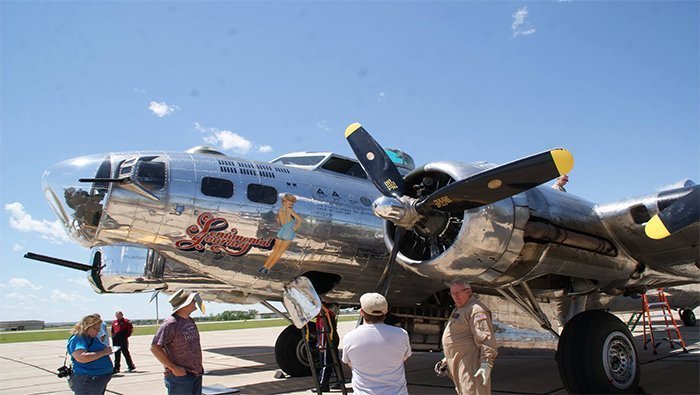 BULLHEAD/LAUGHLIN–An iconic airplane from World War II will be making a stop at the local airport in September as part of its Summer Flying Legends of Victory tour.

The WWII B-17 Bomber “Sentimental Journey” will be on display from Tuesday, Sept. 4 through Sunday, Sept 9 at the Laughlin/Bullhead International Airport/Signature Flight Support, 2550 Laughlin View Drive.

Marketing & Communications Manager Corey Paul said the public will have the opportunity to climb aboard the B-17 Bomber to soak in the breathtaking stories of courage and service by Americans during one of the most important periods in U.S. history.

The B-17 is an exceptionally rare aircraft, as it’s one of eight in the world that is still flying. Nicknamed the “Flying Fortress,” the B-17 was a strategic weapon in WWII because of its ability to suffer extensive battle damage and still return home, said Paul.

For those flying enthusiasts, book in advance to take flight in the “Flying Fortress” during their stop. The cost for a flight is $425 per waist compartment seat or $850 for bombardier/navigator seats in the nose. Flights are limited to eight passengers per flight.

Paul said the tour is made possible by the volunteers of the Arizona Commemorative Air Force Museum, a non-profit organization that features three restored WWII combat aircrafts: C-47/DC-3 Combat Legend “Old Number 30;” B-17 Bomber “Sentimental Journey;” and B-25 Bomber “Maid in the Shade.”

These warbirds and their crews will follow separate tour routes across the U.S. and Canada and visit about 50 cities from now through October 2018 to fulfill their mission of educating all generations about the role of aviation in combat, said Paul.

Rides are available September 7 through September 9 from 10 a.m. to 1 p.m.

For more tickets to ride the bomber, visit http://bit.ly/FLOVTBullheadCityAZ.

For mor information about the Flying Legends of Victory Tour, visit www.flyinglegendtours.com.