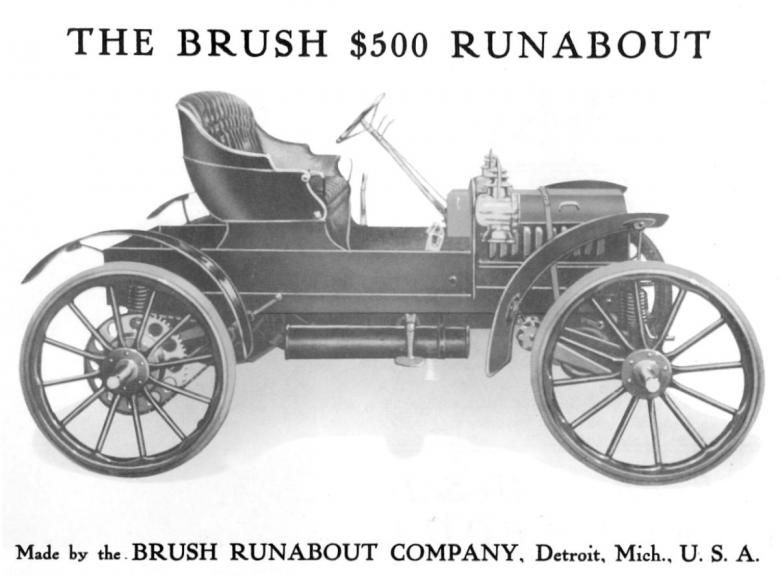 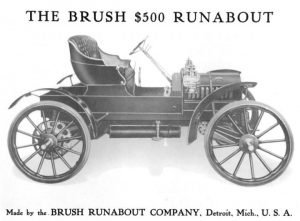 It was an odd way to market an automobile. After taking first place in a number of prestigious hill climbing events in 1908 the Brush Runabout Company initiated a marketing campaign that noted the superiority of the Brush. The cornerstone for the advertising campaign was the explanation that if a prospective owner reflected on the reason a squirrel can climb a tree better than an elephant then they would understand the prowess of the Brush. Odd marketing aside, the Brush proved to be a popular selling automobile. And it quickly developed a reputation for durability.

The story of the Brush Runabout begins with Cadillac in 1902. With great fanfare a crowd estimated to number in the thousands gathered on a crisp October morning to witness an automotive feat. They had turned out to see an automobile driven up the steps at the entrance of the newly constructed Wayne County Courthouse in Detroit, Michigan. They were not disappointed. A diminutive little horseless carriage drove down Randolph Street, turned and without missing a beat, climbed the steps and then descended. It was the first Cadillac produced and the man in the driver’s seat was Alanson P. Brush. As an historic footnote the park in front of the courthouse would be renamed Cadillac Square in commemoration.

Alanson Partridge Brush was a gifted, self-taught mechanical engineer. William Durant would often refer to him as a genius. During the closing years of the 19th century he accepted employment as an apprentice in the workshops of French automakers Darracq and Mors. But his apprenticeship was brought up short by the Spanish American War and fighting with an infantry unit battling in Cuba.

In late 1899, after the war, Brush accepted a position at Leland & Faulconer Machine Shop. The company that was established in 1890 by Henry Leland, who had learned precision machining from Samuel Colt, and Michigan lumber baron Robert C. Faulconer, had a reputation in Detroit for quality machine work. Brush did not arrive empty handed as he had already filed for a number of patents.

Shortly after his arrival, Leland accepted a contract to manufacture hundreds of gasoline engines for Ransom E. Olds. However, before production could commence Brush modified the design boosting engine output by more than twenty percent. And then, just as production was ramping up, Olds canceled his order. In March 1901, a fire ravaged the Olds factory making it impossible to retool for the new model that he planned to release later that year.

Fortuitously a few months later Leland was retained as a consultant by William Murphy and Lemuel W. Bowen. These men were two of the primary financiers of Henry Ford’s Henry Ford Company. Leland was hired to appraise the Ford factory and equipment so they could liquidate it and recoup a portion of their investment.

Ford was incensed and left the company with a small check as a well as a demand that his name no longer be used. Leland seized the opportunity. He convinced Murphy and Bowen to keep the factory open and presented the engine designed by Brush for Olds. Then the company was reorganized under the Cadillac name.

Following the highly publicized demonstration drive up the courthouse steps, the prototype Cadillac was displayed at the New York Automobile Show. Within one week sales manager William E. Metzger had taken more than 2,200 orders with cash deposits. In 1903, the Cadillac Model A was introduced with numerous Brush patented components. Working with Leland, Brush, now Cadillac’s chief engineer, continued perfecting the 10 horse-power, single-cylinder engine that displaced 98.2 cubic inches, and that had a detachable cast-alloy cylinder assembly with a copper water jacket for more efficient cooling. The car also featured an improved carburetor. This was in addition to highly advanced adjustable rack-and-pinion steering and Brush’s patented two-speed planetary transmission.

In the years that followed Brush would build an impressive resume. The first four-cylinder Cadillac engine in 1905 was a Brush design. Shortly afterwards he left Cadillac, teamed up with Edward Murphy, owner of the Pontiac Buggy Company, and assisted in the launch of Oakland Motor Car Company. Then he established a consultation company in Detroit with a long list of prestigious clients including William Durant who had recently founded General Motors.

Then in the summer of 1907 Brush revisited the idea of manufacturing a light, two-cylinder runabout of his design that had been rejected by Leland at Cadillac. For financing Brush approached an old associate, Frank Briscoe, whose brother Benjamin had founded Maxwell-Briscoe with Jonathan Maxwell in 1904. By year’s end, the Brush Runabout Company was producing one of the most successful light cars of the period. Even though it was initially sold for an astounding low price of $500, the car bristled with innovation.  As an example, it was the first production vehicle in the United States to feature coil springs and shock absorbers at all four wheels.

The Brush won critical acclaim through competition. It was one of the few vehicles to complete the grueling 2,636-mile Glidden Tour in 1909. The same year a Brush was driven to a new Pikes Peak hill climbing record. A 1912 Model F Brush Runabout was the first motor vehicle to cross Australia. But that astounding feat was the company’s swan song.

By 1910, Durant was gobbling up companies for inclusion in the General Motors conglomerate. Oakland was one of his acquisitions. Meanwhile Benjamin Briscoe had established United States Motor Company as a competitor and was also purchasing a number of manufacturers including Stoddard-Dayton and Brush. By the end of 1912, the United States Motor Company, and by association Brush, had collapsed. 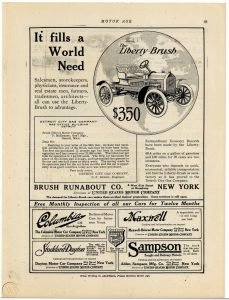 The Brush Runabout may have been history, but Alanson Brush would go on to build a distinguished career as a consulting engineer for his company, the Brush Engineering Association. He designed the 150-cu.in. inline-four-cylinder engine for the Monroe driven by Gaston Chevrolet to victory in the 1920 Indianapolis 500 as well as engines for Marmon and American LaFrance. He also successfully launched a second career as an expert witness in patent-infringement cases. When Brush died in March 1952, the Detroit News mourned the passing of “a colorful auto pioneer.”

Written by Jim Hinckley of jimhinckleysamerica.com

← Prev: TROOPERS SEIZE OVER 50 POUNDS OF METHAMPHETAMINE AND 5 POUNDS OF FENTANYL DURING TRAFFIC STOP Next: FATAL VEHICLE COLLISION / MANSLAUGHTER- KINGMAN → 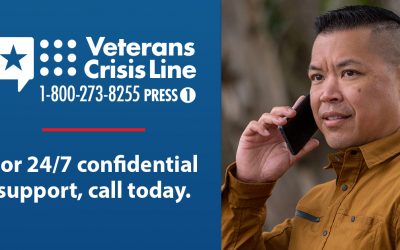 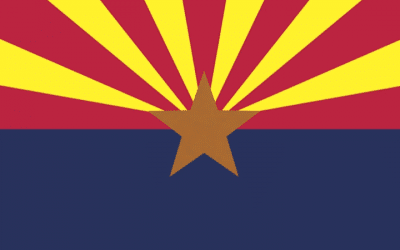