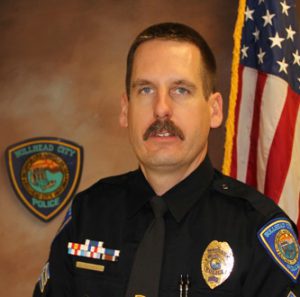 The award will be presented by the Arizona Game and Fish Department.

McNally began his career in law enforcement in 1995 and recently retired after working for the Bullhead City Police Department for 20 years. Water safety and education have always been important to McNally. Before he began his law enforcement career, he spent summers working as a lifeguard and a water safety/first aid and CPR instructor. During his law enforcement career, McNally was assigned to multiple specialty assignments. He served on the Bullhead City Police Department’s negotiations team and dive team, and worked as a driver instructor and field training officer.

As the supervisor to the department’s water patrol unit, McNally realized that rental watercraft were directly involved in most of the collisions on the Colorado River. He worked closely with the Arizona Game and Fish Department’s education and law enforcement programs, National Marine Manufacturers Association, Nevada Department of Wildlife and local watercraft rental businesses to create an educational boating safety video that includes local waterway concerns and hazards in order to enhance the safety practices of operators of rental watercraft. In early 2017, McNally’s efforts led to the Bullhead City Council voting unanimously to adopt a city ordinance that requires people to watch a boating safety video prior to renting and operating watercraft on the Colorado River.

Other public safety innovations include the development of a partnership between the police department and a professional lifeguard company to increase boating safety on the Colorado River. The partnership placed two contract personal watercrafts with two ocean-trained lifeguards on the river during each weekend during summer 2017. Lifeguards also were added to police patrol boats, increasing the department’s public contact by engaging in accident prevention conversations with watercraft operators and users of the Colorado River. Due to McNally’s efforts, this program will likely be sustained by the department.

“Sgt. McNally dedicated a majority of his career to public safety, and there’s no doubt that his efforts have helped save lives and prevented boating incidents,” said Tim Baumgarten, boating law administrator for the Arizona Game and Fish Department.