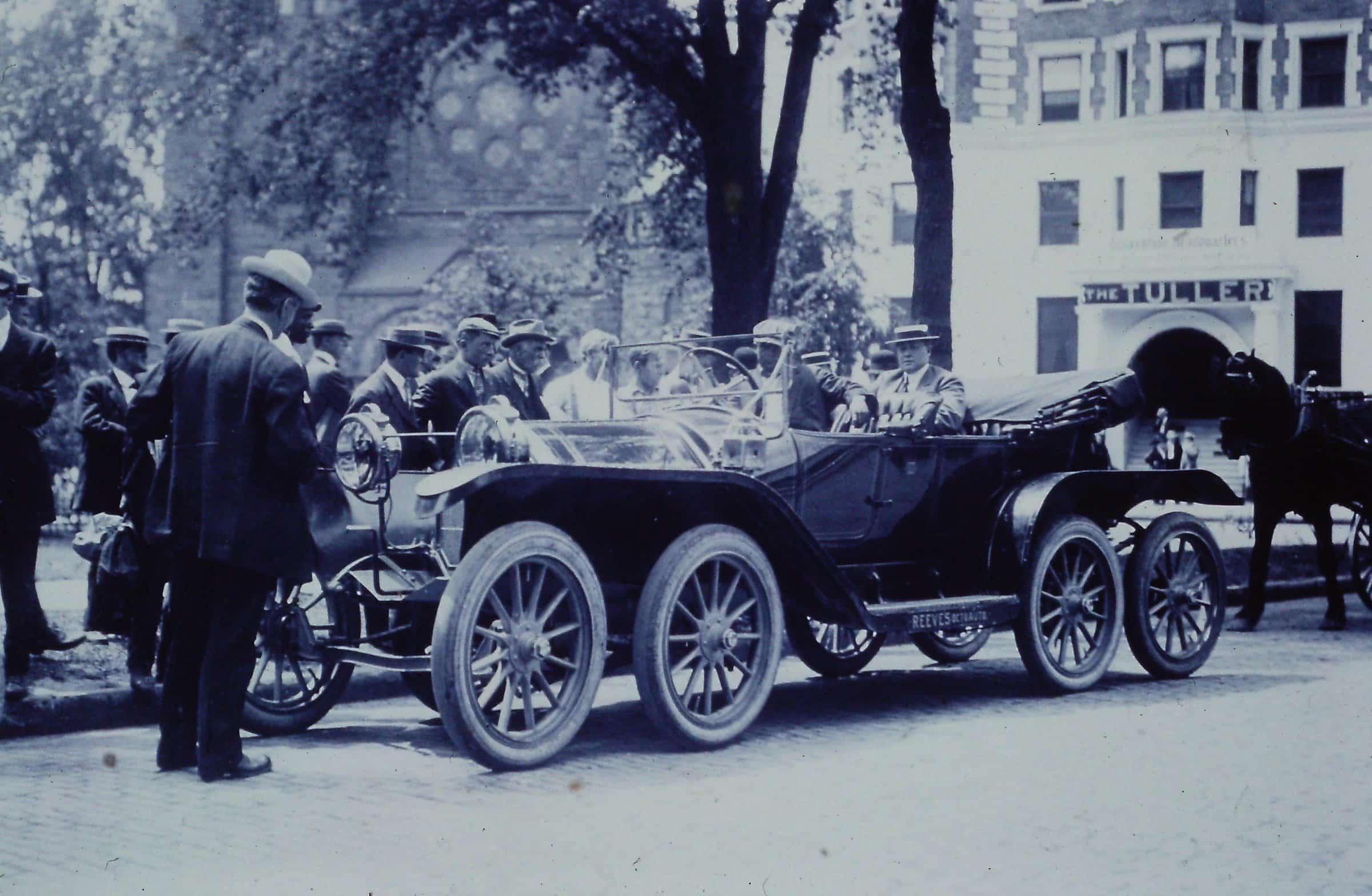 The line between eccentricity and visionary, brilliance and madness is thin. The people that change the world with innovation can give the impression of quirkiness as they live in the future, not the present. Manifestations of their vision is found in Tesla, cell phone technology, the internet, and television.

Milton O. Reeves was not a man without imagination. As to whether he was a visionary or eccentric, well, the verdict is still out. You decide.

Reeves was a man with steadfast determination that was not afraid of ridicule or derision, a particularly important quality if you intend to manufacture and attempt to market a six or eight-wheel car. Even as a child, in his imagination devices were conceived to save time or labor, or to streamline a process. Fast forward to 1879.

While working at a sawmill in Columbus, Indiana, Reeves noted that if the speed of the saws could be controlled in a uniform manner there would be a reduction of waste which in turn would result in increased profits. And so, he devised a variable speed transmission that utilized a series of tapered pulleys. Think Dodge Calibre.

Marshal, Milton’s brother, was a successful inventor as well as businessmen. In 1869 he had patented an improved version of the standard corn plow, and in 1875 had launched the Hoosier Boy Cultivator Company in partnership with his father and an uncle. Milton’s variable speed transmission piqued their interest and in 1888 the Reeves brothers purchased the Edinburg Pulley Company and renamed it the Reeves Pulley Company.

In a moment of insightful brilliance Milton Reeves devised a promotional idea for the company that was linked to the bicycling mania that had become a national obsession in the early 1890s. In 1896 he added a Sintz engine coupled to a Reeves variable speed transmission to a bicycle. His motorcycle proved an ideal means of drawing attention to the transmission. So, the following year Reeves took the idea a step further by blending a four-wheel carriage with the same mechanical components.

However, the public outcry over noise and the horses that were terrorized by the vehicle as Reeves drove the streets of Columbus, Indiana made it almost impossible to use thevehicle to promote the transmission. So, Reeves devised two innovations that he hoped would resolve these issues, and perhaps, become marketable commodities. The first was a muffler, an ingenious round metal box that housed a set of tubes with holes that dramatically curtailed noise. Reeves and his brother patented the device in 1897. That was the first muffler designed specifically for automobiles.

His second idea was nothing short of bizarre. He purchased a life-sized papier-mache horse that was being used to promote a blacksmith shop, cut it off at the front shoulders and mounted it on the front of the vehicle. The thought was that this would curtail the nervousness of horses. As if that was not odd enough, Reeves used the hollow horse neck to house the gasoline tank!

For the second generation vehicle the muffler stayed, the horse head was discarded, and the car was given a polished ebony body. The Reeves Motocycle garnered a surprising amount of press, and unsolicited orders for five vehicles. The first two vehicles used the two-cylinder, two cycle, six horsepower Sintz Gas Engine Company engine and double chain drive unit coupled to the Reeves variable speed transmission. The other three, however, utilized an air-cooled engine designed by Milton Reeves. After filling the orders, the company announced that they would not continue producing automobiles but would instead focus on the manufacture of the Reeves transmissions and motors only. This, however, was not the end of Milton Reeves automotive ventures. It was merely the beginning.

In late 1905, Alexander Y. Malcomson ordered an entire year’s production (500 units) of air-cooled engines for an automobile manufacturing company that he was launching in Detroit. His Aerocar venture proved to be short lived and so Reeves found himself with controlling interest in a moribund company. To recover his investment, Reeves began cobbling together a variety of cars; some with shaft drive, some chain drive and even a high wheeler marketed as a Go Buggy in 1907 that was offered at $450 without body.

The final chapters in Reeves automotive endeavors were, shall we say, unusual. After evaluating automobiles currently on the market, he had determined that riding comfort, and tire life, would be improved by moving beyond the industry standard of four wheels. The first endeavor was the Octoauto built from a highly modified Overland chassis. The eight-wheeled oddity on a 180-inch wheelbase was finished for display at the inaugural 1911 Indianapolis 500.

Reeves honestly felt that the concept was marketable. “The eight-wheel concept is applicable to any vehicle. Therefore, if interested contact any automobile manufacturer or myself.” This is the opening for a multi page promotional brochure published for the debut. For obvious reasons, the project ended with the single prototype.

Reeves was never a man that gave up easily. So, he set out to build the Sextoauto, a six wheeled vehicle. Two were built. The first was the Octoauto with one front axle removed. The second was manufactured on a modified Stutz chassis and promoted as a luxury car with variable speed transmission. There was even an abbreviated promotional tour that included a cross-country jaunt. Commercially the endeavor was as successful as the Octoauto.

Reeves, the first patent for an automotive muffler, the Octoauto and Sextoauto are today forgotten chapters in the history of the automobile industry. But his legacy lives on in the dreamers and visionaries that march to the tune of a different drummer as they seek to change the world. 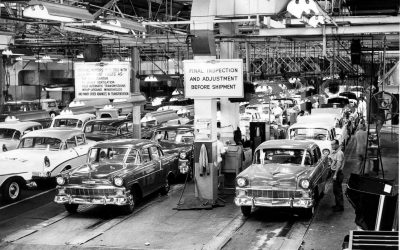 The All American Import

If you want to spark some intense conversation during Thanksgiving dinner, here is a suggestion. Mention the fact that...

The Past, Present & Future of The EV

Tesla, Lucid Motors, and Rivian are in the news almost daily. The electric vehicle is a point of contention, a glimpse...