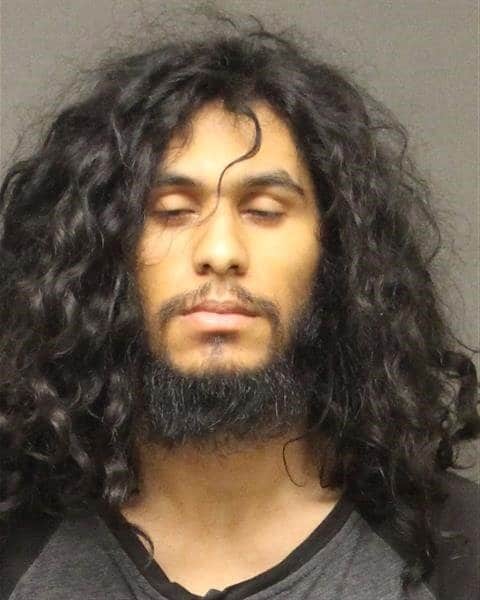 Mohave County Sheriff’s Office Deputies arrested Isaiha Boregard Caril-Hill, 23 of Fort Mohave, for 1st
Degree Murder per Domestic Violence, two counts of Aggravated Assault with a Deadly Weapon per
Domestic Violence, and Leaving the Scene of an Accident involving Death, all felonies. On Sunday (1/15) at
approximately 1 pm, Detectives responded to the 7900 block of Highway 68 in Golden Valley for a report of
a deceased male located next to the roadway.
Department of Public Safety (DPS) Troopers initially responded to the scene at approximately 9 am that
morning and began the investigation, which was then turned over to MCSO Detectives at 1 pm. Video
evidence of the incident was collected from a nearby business and showed a vehicle stopping along the
highway Saturday night. In the video, a single subject can be seen walking away from the vehicle. At
approximately 6:30 pm, the vehicle is seen striking the subject and driving away. The deceased subject was
identified as Lester Caril (68), Isaiha Caril-Hill’s father.
On the Saturday evening (1/14) at approximately 6:35 pm, Deputies responded to the area of Abrigo Dr. and
Egar Rd. where a black SUV had been involved in a roll-over crash. Caril-Hill was arrested for suspicion of
DUI and an unrelated warrant, with deputies unaware of the homicide that had just occurred involving the
SUV. Caril-Hill was extremely agitated and threatened responders while being extricated from the vehicle.
Deputies identified the vehicle as being registered to the homicide victim, Lester Caril. Debris found on
scene of the homicide was consistent with damages on the SUV. Caril-Hill did not say anything about the
homicide during his arrest.
After investigating the homicide on Sunday, Detectives responded to the Mohave County Adult Detention
Facility where Caril-Hill was being held on DUI charges. During interviews, Caril-Hill advised that his dad
was driving the vehicle when an altercation occurred, and Lester Caril pulled off the highway and exited the

vehicle. Caril-Hill admitted hitting his dad with the vehicle and driving off, where he was involved in the roll-
over crash a short time later. This investigation is ongoing.