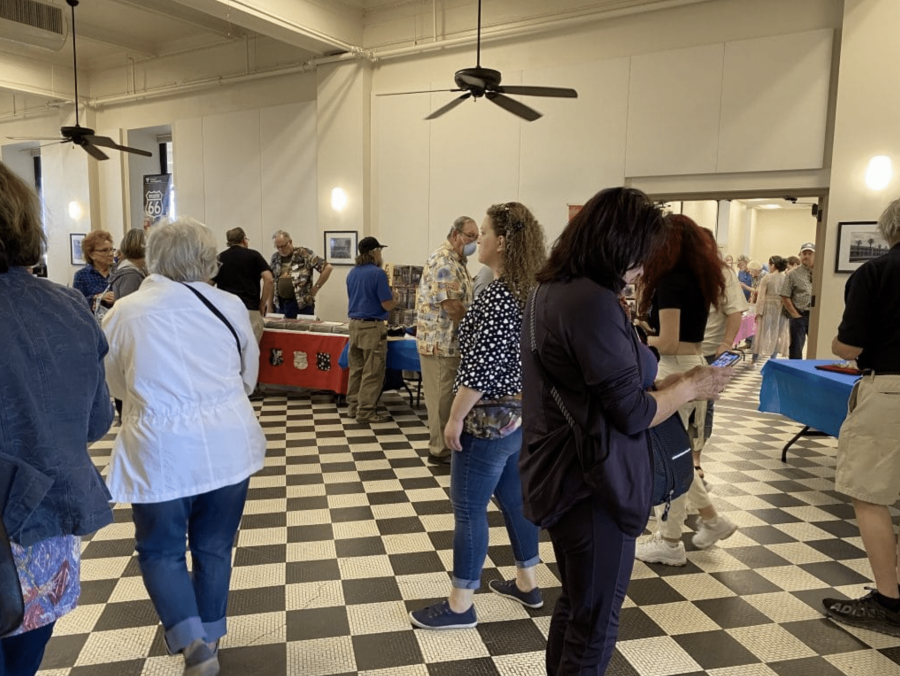 On Saturday, February 12 the California Historic Route 66 Association hosted the anniversary celebration of the National Scenic Byway designation of Route 66 between Needles and Barstow, California. Sponsored by Needles Tourism, Needles Regional Museum, and Friends of the El Garces, the event held at the historic El Garces complex illustrated the enduring popularity of Route 66. It also provided insight into how Route 66 related tourism can be used as a catalyst for economic development as well as historic district revitalization.

The event opened with Dr. Ed Paget, Vice Mayor of the City of Needles reading and presenting a proclamation recognizing the first anniversary of the National Scenic Byway to California Historic Route 66 Association President Scott Piotrowski. Representatives of the Needles Chamber of Commerce greeted visitors and provided information about the city. And throughout the day tours of the El Garces were provided. VFW Post 404 cooked hot dogs and hamburgers, and a display of vintage cars lined the street in front of the museum across the plaza at the El Garces.

Aside from an informational display provided and staffed by members of the California Historic Route 66 Association, the village of Atlanta, Illinois was also being promoted. Whitney Ortiz, Atlanta’s tourism director, and Julianna Nordman of that city’s museum, was on hand to provide promotional material and answer questions. Dora Meroney, and her husband Andy, of the Texas Old Route 66 Association were also in attendance.

Internationally acclaimed author Jim Hinckley, and his wife Judy, of the Jim Hinckley’s America network provided travel planning assistance including an array of rack cards from diverse locations including the iconic Wagon Wheel Motel in Cuba, Missouri. They also provided promotional materials from the City of Tucumcari, and magazines from the New mexico Route 66 Association. A looping slideshow that provided a virtual tour of Route 66 from Chicago to Santa Monica was also displayed.

Indicative of the legendary highways international appeal were displays about the Mother Road Route 66 Passport and information about the Route 66 Navigation app. Both products that have transformed the travel experience on Route 66 were developed by Touch Media, a company based in Bratislava, Slovakia.

Prolific post card collector MIke Ward from Phoenix created an expansive exhibit for the event. It included vintage post cards from along the Route 66 corridor, historic maps, and travel guides from the era of the National Old Trails Road. The exhibit included a number of post cards from Needles from the first decades of the 20th century. 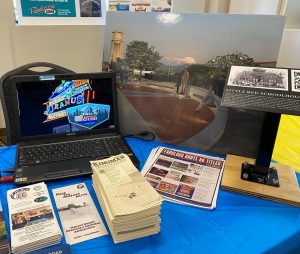 Another display included an artist rendering of a plaza being built along Route 66 at the depot in Kingman, Arizona. The plaza will include a public art display, a commeorative brick garden and Route 66 Walk of Fame. This and an innovative self guided, narrated historic district walking tour being developed by Kingman Main Street will be unveiled at the National Road Trip Day celebration scheduled for May 27. A sample kiosk with QR code that linked to the tours website was also displayed.

After the exhibition closed there was an informal gathering of Route 66 association and community representatives at the Wagon Wheel Restaurant. Topics of discussion included the Route 66 centennial, Route 66 promotion and marketing, and the building of cooperative partnerships to enhance tourism along the highway corridor.