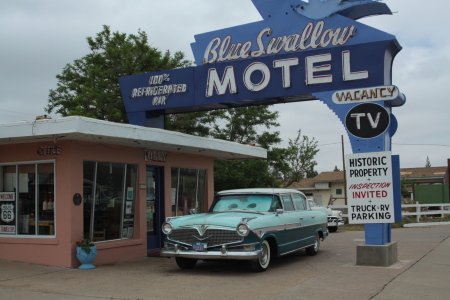 The story of American Motors, the last independent manufacturer to challenge the big three, General Motors, Ford, and Chrysler, had its early chapters written in Lansing and Detroit, Michigan. There is also a link for the Kenosha, Wisconsin based company’s story to Bar Harbor, Maine, and a world-famous cancer research center. As with so many tales from the dawning of the American auto industry, the story begins with the vision of one man.

By all accounts Roscoe Jackson was a gifted young mechanical engineer. It was that reputation which led Ransom E. Olds to offer Jackson a position at the Olds Motor Works in 1902. He was part of a team of youthful visionaries that included Roy D. Chapin, Howard E. Coffin, James J. Brady, and Frederick O. Bezner. Together these men would make incredible contributions to the embryonic American auto industry and set it on the path to world dominance.

But Jackson was also a man consumed with ambition. His career was meteoritic and within five years he had risen through the ranks to the position of manager at the main Olds assembly plant. Meanwhile, spurred on by ideas developed by Jackson, Chapin, Coffin, and Brady began laying plans to launch a company of their own.

Then in 1908, shortly after marrying the niece of Detroit retail store magnate Joseph L. Hudson, the team acquired a new member of their planning sessions, Frederick Bezner ,who had left Olds for a position at Chalmers-Detroit.

With his father-in-law as a major investor Jackson and his swashbuckling band launched a company that become an industry leader. An article dated June 19, 1909 in the Saturday Evening Post noted the formation of a new automotive manufacturing company in Detroit – Hudson.

From the date that the first car rolled from the factory on July 8, 1909, the cars reputation for speed and durability began to grow exponentially. Before WWI, Hudson consistently ranked in the top ten American automobile manufacturers, an amazing feat since there were literally dozens of companies producing automobiles.

In 1916 shortly after introducing the now legendary Super Six, Chapin and Jackson rebuffed a proposal to merge Hudson with Willys-Overland and Chalmers. Instead, they initiated a series of meetings with plans to merge Hudson with Dodge and Continental Engines as well as Timken, the leading manufacturer of automotive bearings. The mergers were stillborn and so Hudson was reorganized with a new stock issuance that made Hudson’s surviving founders fabulously rich men.

In 1923 Chapin resigned but assumed a position as chairman of the board. Jackson assumed Chapin’s former role as president. In March 1929, Jackson died suddenly of influenza while on a trip to Europe. But Hudson was only one facet of his legacy.

In the early 1920s, Jackson and several wealthy Detroit tycoons including Edsel Ford began vacationing along the coast of Maine near Bar Harbor and todays Acadia National Park. One year while on vacation they came to know the former president of the University of Maine, a Harvard-trained biologist and medical researcher named Clarence C. Little.

Little was a pioneer in the development of cancer research and at the time of the first meeting with Jackson and Ford, was in the planning stage of establishing a research laboratory on the Maine coast. This was to be an expansion of the cancer research facility he had established at the University of Michigan. Impressed with his work, Jackson, his brother-in-law, president of the expansive Hudson retail businesses, Richard Webber, and Ford become benefactors to Little’s University of Michigan facility. In 1929, shortly before his death, Jackson agreed to underwrite establishment of the Maine facility in Bar Harbor. Stunned at the abrupt loss of their key supporter, Little and the board unanimously agreed to rename the research unit the Roscoe B. Jackson Memorial Laboratory.

Jackson died four months before the 20th anniversary of Hudson. It was a tumultuous time for the company. Chapin had accepted appointment as Herbert Hoover’s commerce secretary, a position fraught with scandal after he organized a “to big to fail” campaign to bail out key Detroit banks, many of which were affiliated with the Guardian Group, an organization that was chaired by Chapin. With the election of Franklin D. Roosevelt, Chapin returned to a position of management at Hudson.

The leadership void created by Chapin’s departure and Jackson’s death, coupled with the deteriorating economic climate had left Hudson in a precarious financial position. The strain of restoring the company to solvency was credited as a contributing factor in Chapin’s death at age fifty-six in 1936.

Hudson would survive the Great Depression. But as with Studebaker, Nash, Pierce Arrow, Auburn, and Packard, the company was a shadow of what it had been in the 1920s. In the post WWII years there would be numerous successes such as the introduction of the legendary Hudson Hornet. Still, by 1950 it had become increasingly apparent that the company could not successfully compete against the big three auto manufacturers. Survival required hard decisions and the board of directors turned toward the idea of merger for the first time since 1916.

President George Mason of Nash initially planned a merger with Packard in 1948. He and the President of Packard, James Nance had created a proposal but neither man was able to finalize the plan with their respective board of directors. In 1954, Mason’s second attempt was more successful when he facilitated the merger of Nash-Kelvinator Corporation and Hudson Motor Car Company to create American Motors. Mason envisioned this as the first step in the building of a powerful automobile manufacturing combine that would also include Packard and Studebaker.

The brilliant strategy came up short when Packard merged with Studebaker two months after the formation of American Motors. The plan to merge the four companies died with Mason on October 8, 1954. When George Romney, former vice president, assumed the leadership position he terminated discussions to merge with Packard-Studebaker, and began focusing on making American Motors a contender.

First, he phased out the Nash and Hudson names in late 1957. Next, he focused all resources on the development of the Rambler. In 1959 a Rambler won the 1959 Mobil Economy Run as well as accolades from numerous automotive publications. Incredibly by 1960, Rambler by American Motors was the third most popular brand of automobile in the United States, behind Ford and Chevrolet. Chrysler was a distant fourth. The success of the small car that was in stark contrast to the large chrome bedecked and finned cars that were rolling from the factories of Ford, Chrysler and General Motors was aided in part to a major economic recession

To compete Chevrolet unveiled the Corvair and then Chevy II. Ford unveiled the Falcon, and Chrysler the Valiant and Dart. These cars were the ghost of Christmas future when a decade later an energy crisis would leave manufacturers scrambling to recreate what AMC had done in 1958.

And it all began with one man, one visionary that inspired others to transform a dream into a reality. Roscoe Jackson, the forgotten pioneer with a legacy that bridged the modern era with the origins of the American auto industry. 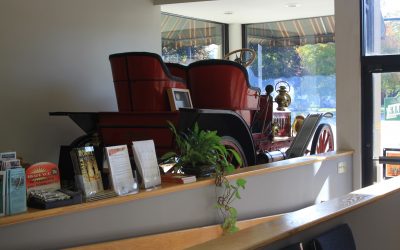 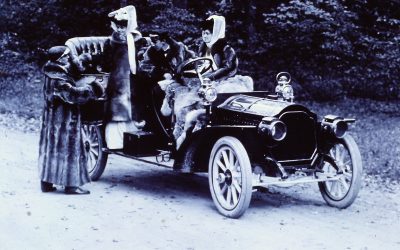