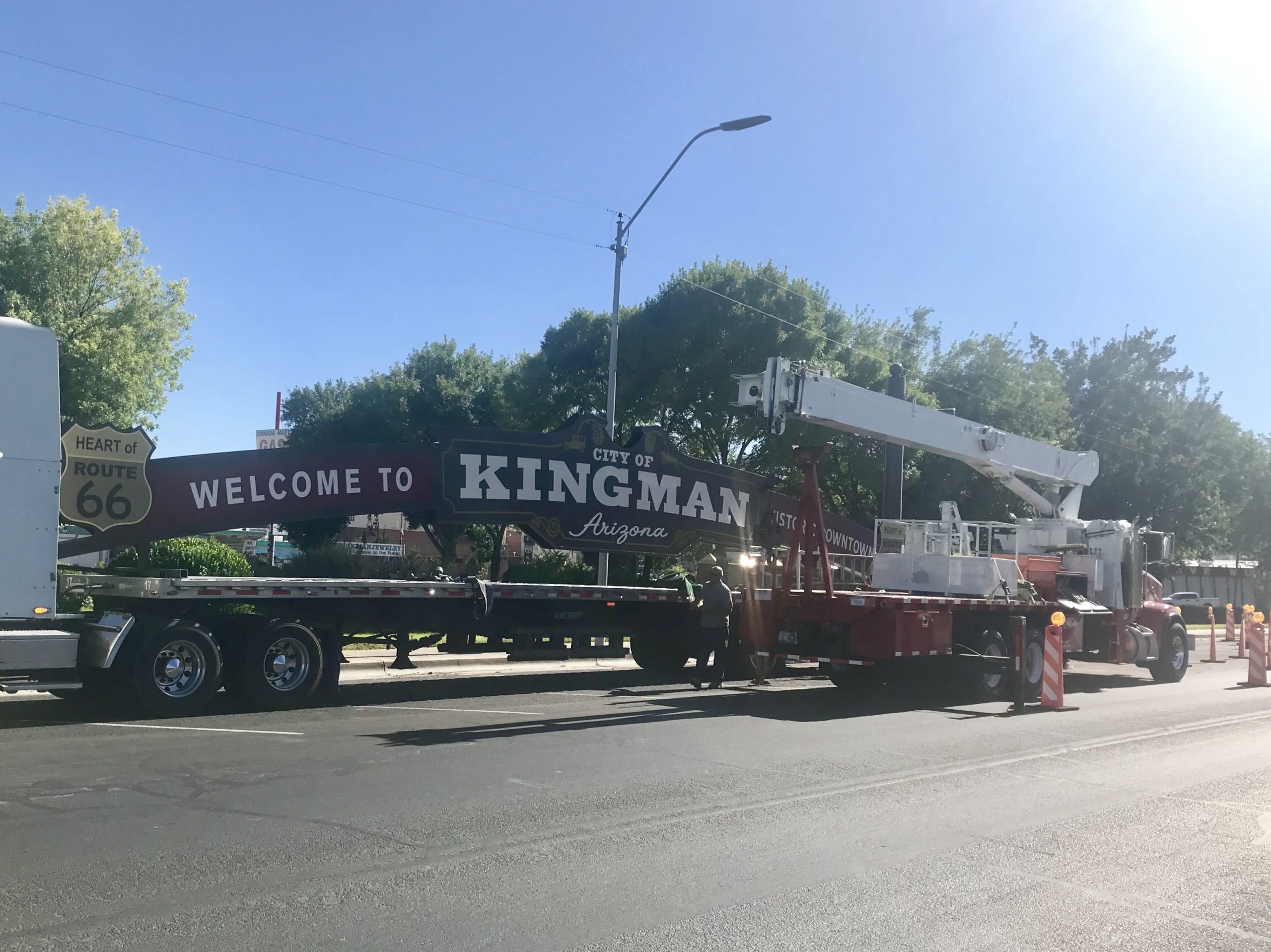 It might’ve caught the attention of a few motorists on the way into town and that’s kind of the point.

The Kingman Route 66 Gateway Arch is on ground and ready to be mounted on the poles on Beale Street between Grandview Avenue and First Street near Dick Grounds Field and Locomotive Park.

The arch’s estimated cost of $170,000 and tourist-attracting, city-beautification purpose is among one of the many disputes between those who want to see the community grow, entice passersby to visit downtown and add one more piece of eye candy that isn’t a truck stop or gas station.

Young Electric Sign Company crews will begin welding the arch to the poles around 7 a.m. and all should be in place by noon. The sign will be visible, but illumination will have to wait until the next Downtown Kingman’s First Friday festivities kick off July 6.

First Friday activities have been luring people downtown and most are loving it. July’s location will change, but don’t let the temperature worry you. City of Kingman Deputy Director of Tourism Josh Noble has a remedy.

The First Friday Kingman Arch Dedication will kick off at sunset, 7:54 p.m. The sign will be lit via solar lights at sundown from then on out.

Live music, waterslides, slip-n-slides and other heat-beating amenities are planned to cool the crowd in one way, shape or form. Food is still in the works and may be at Locomotive Park where the rest of the party will be, but downtown restaurants are only a few blocks away.

Along with Octoberfest, Kingman Festival of the Arts, the Route 66 Fun Run and Andy Devine Days, Noble is hoping for another event to hook locals and tourists.

“I hope we can do this every year,” he said.

Some sort of welcome mat has been in the works since at least 2005, but 2018 just happened to fall on a significant date. Kingman was incorporated as a township in 1952. Sixty-six years later, the welcome has arrived.

“The arch is kind of a gift to Kingman’s 66th year,” Noble said.

He also said the City of Kingman Public Works will be in the spotlight. Water, streets and sanitation divisions will all have representatives on site to talk and teach the town how the city’s infrastructure comes together.

“We’re hoping this will be a fun event that will change how people see this,” Noble said.