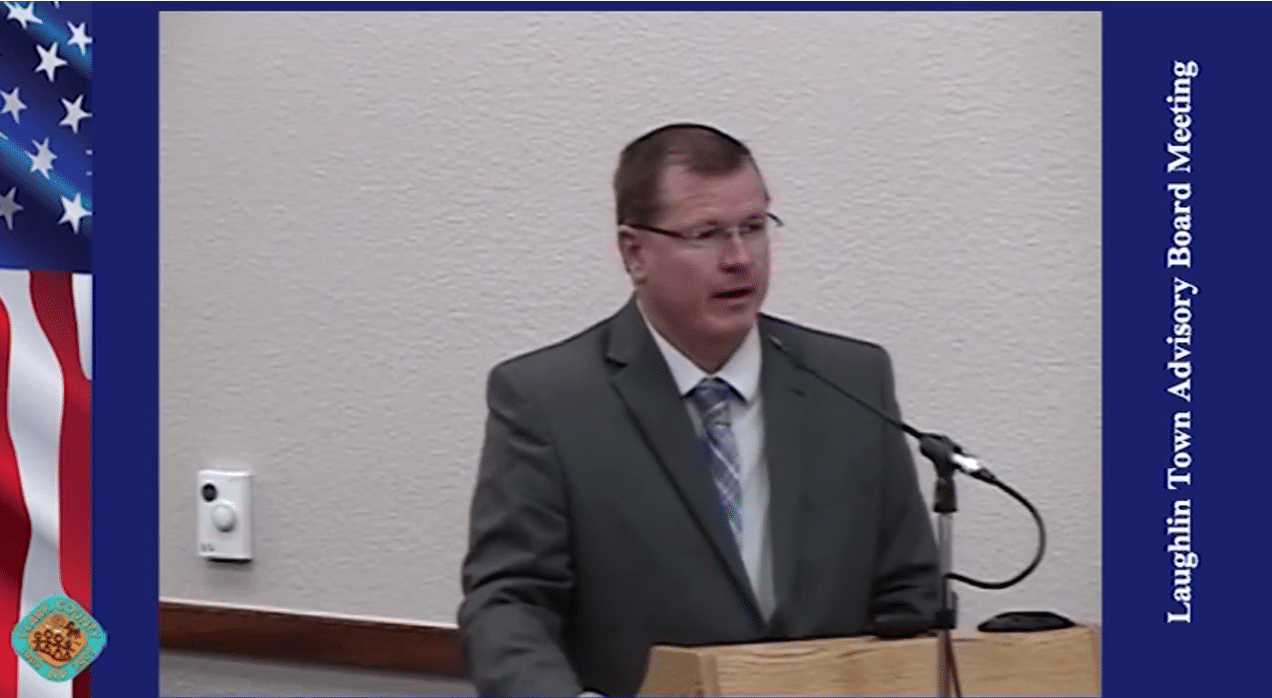 On Tuesday April 12th the Laughlin Town Advisory Meeting started public session with comments from the heart by Michael Bohannon. His daughter Izabella was the most severely injured member of their family, after an individual renting a Jet ski ran it ashore, hitting both of his daughters before beaching itself on top of his wife.

Mr. Bohannon talked of the numerous injuries Izabella had suffered “Bilateral dissection of her carotid arteries. [She was] her whole face was fractured, [her] she had bleeds, she had strokes, she had brain surgeries, she had her skull removed. She was flown to Salt Lake where they put a stint in her brain, to fix the arteries. This little girl fought like I’ve never seen before.”

“That’s why I’m here, is to ask you folks to join Bullhead and try to find a solution, if you’re not a part of the solution, you are part of the problem.”

Bullhead city resident Dianna Smith questioned how far watercrafts must be from shore when people are in the water. Lt. Walther’s later answered that question, “NRS 488-600 States operating a vessel within 100 ft of swimmer, so if you can imagine, our River in some instances is not even 100 ft wide, so that would involve stopping every vessel passing through the bottleneck at Chamber of Commerce and writing them a citation, which probably is not going to happen. 200 feet within any beach.”

City Manager Toby Cotter replied to the idea of a joint commission “It’s needed it’s necessary, it’s ongoing right, this won’t be solved today, so on the Arizona side we’d be absolutely happy to participate in some joint legislative work, some joint efforts with the county to create that legislation that we all could live with.”

Mayoral Candidate Ashley Gerich brough up the language of the current laws putting emphasis on reckless behavior. “I think that we need to take into account, that we do have legislation in effect that can protect us and that our law enforcement does need to abide by and he” motioning to Lt Walther, “did say “I enforce the law” and the law states that recklessness is against the law.”

Mayoral Candidate Waheed Zehri was present at the meeting. He did not make public comments but showed open support for his fellows and residents.

Bo Hellams with Bullhead City Chamber of Commerce, who is also a member of Water Rescue and Safety, “Our lifeguard agency, these are not volunteers they are specialty operators, myself included, hundreds of hours of water rescue certifications and open water on the ocean, multiple weeks of training.”

“Being able to spend money on enforcement is going to help the issue of course but being able to share the load of the lifeguards and enhance those services is actually creating quality safety for this River.”

Councilwoman Grace Hecht agreed with a joint commission stating, “I think that having a Tri-State group working together with all this coming to the table would be very effective so thank you for having this conversation today and I’m looking forward to working with you in the future.”

Discussions on river safety are far from over. With the season already starting, there is urgency to provide solutions to save lives and prevent another season marred by tragedy.

Full video of meeting below