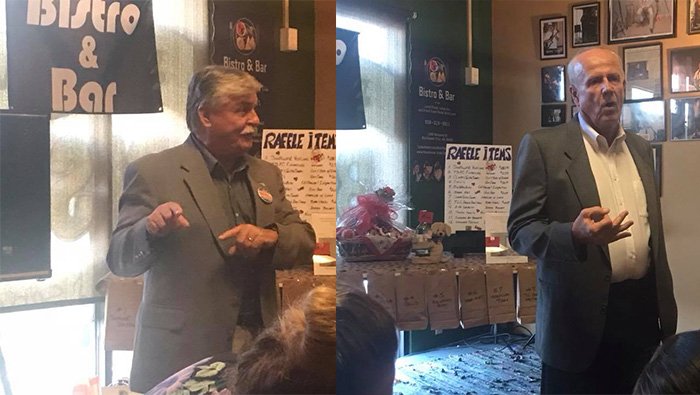 BULLHEAD CITY–Thursday’s guest speaking appearances by mayoral candidate’s at S.A.I.N.T.’s Yappy Hour tried not to involve heated topics like water and franchise agreements, but more so for what they would do to help the pets in the community.

One question immediately brought up was what would be the process to make the current animal shelter a no-kill shelter?

Mayoral candidate Jerry Duvall said, “We, as the city, would have to sit down with S.A.I.N.T. (Saving Animals In Need Together) and the shelter to develop an ordinance or law. The city attorney would also need to be involved to draw up the necessary papers to decide if we need to put in a no-kill shelter in the city.”

“We’d also research how other cities have taken that step to operate a no-kill,” DuVall said.

“Yes, and every animal activist that we can,” Duvall added. “The more input we can get for the council, the city can move forward.”

Incumbent candidate Mayor Tom Brady said he would love to see a no-kill shelter and is currently in discussion with Animal Care & Welfare Director Bradley Oliver about that process.

“We’re close,” said Brady. “However, you need to know that even with a no-kill shelter, it will kill no question about that. You can’t have diseased animals and those not adoptable mixed in with healthy animals. But, it is my understanding we are coming close to having a no-kill and I am very proud of the effort and steps they are making.”

Local resident and owner of Mutt Manners, Brenda Fury asked candidate Duvall what his take is on bringing in, and privatizing, the shelter such as Western Arizona Humane Society did in Kingman.

“Why can’t we have that here?” she asked.

“I’ve never heard of that before, but I would love to explore more of that idea,” said Duvall. “I had a councilman approach me recently about splitting the shelter that way and I told him that I would support him, but would need more facts. It sounds like it runs great.”

S.A.I.N.T. representative Donna Doyle asked both candidates what they would do, if elected, to stop or change the chaining and backyard breeding laws in the city.

“I am really not educated on what this issue is and if S.A.I.N.T. believes it is very important than I believe that you should contact your city council, especially Steve D’Amico, who has always been your champion,” said Brady. “He has done much for you in the ways in changing laws in the community,”

“I always appreciate Steve (D’Amico) and he usually always comes to me and asks me what I think about it and we tend to change it. So, I’m sure Bradley Oliver would say the same thing. We are here to serve you and if we don’t know what the problem is than we don’t act on it. But, if you bring something to us I guarantee we will evaluate it and try to come up with a solution.”

“I just want to echo what Tom said. Steve D’Amico is your champion for the animals in our area. He recently just changed the dog at large ordinance in the city and if there is an issue that needs changed, start with the city council,” he said.

Another attendee got down to the nitty-gritty and asked exactly what were the current kill rates at the city shelter.

Both candidates turned to Oliver for that information.

According to Oliver’s statistics, the shelter euthanized 1,145 animals in 2017. Of those, 510 were owner-requested euthanasias and 220 were feral cats.

“If we had responsible pet ownership, we could’ve saved a lot of the owner euthanized pets,” expressed Oliver. “You guys have to realize, we have a very small shelter and can not have diseased animals come into the shelter with healthy animals. If we can get responsible pet ownership here in Bullhead City, we would be very very close to being a no-kill shelter. If we took away the ownership requested euthanasia and diseased animals, we would be in the double digits of animals that we had to put down.”

Oliver said last year, the shelter only had to put down two healthy animals.

“We are doing a great job with our euthanasia program,” he added.

“Lori, what he said,” said Brady, pointing to Oliver.

“But, what I want to know is what is the city doing for the euthanasia program to reduce it,” she asked again.

“What we are doing at the Animal Care & Welfare is we have a clinic that comes into town twice a month, we have a licensed veterinarian in our shelter twice a month,” said Oliver. “Last year,  we consulted with 700 responsible pet owners, gave out 1,645 vaccinations, inserted 87 microchips and gave a lot of wellness exams.”

Oliver told guests that recently his department had to remove 105 cats from a Bullhead City home. Each one of the cats, he said, were diseased and non-adoptable.

“We need to get the word out to those to be a responsible pet owner, which is very important because with that our euthanasias will go down.”

For more information on both candidates, visit The Bee’s Election 2018 section.