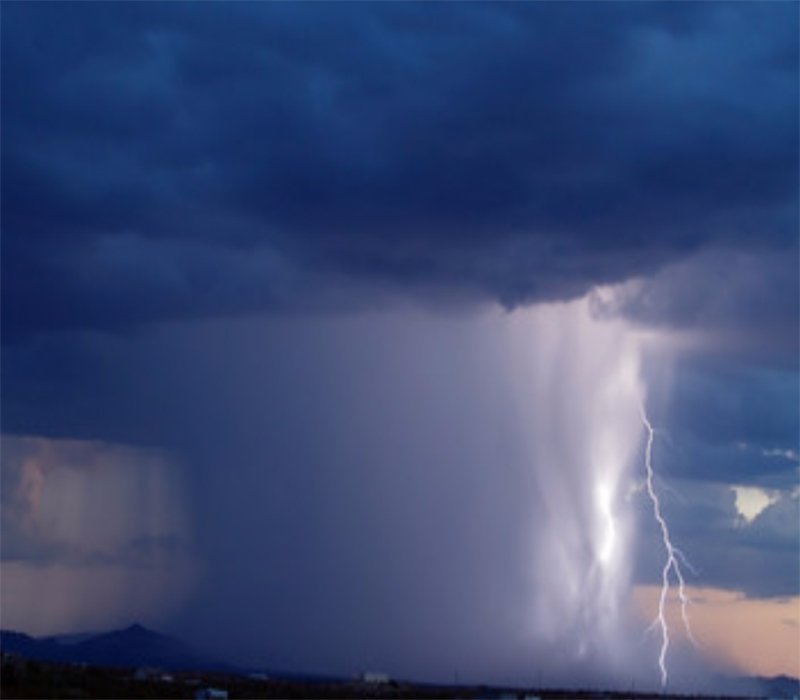 MOHAVE COUNTY–With the summer months upon us, it also means the beginning of monsoon season.

Between June 10 and June 15, officials observe Monsoon Safety Awareness Week with a goal to educate the community to help reduce the number of deaths, injuries and property damage that can be caused by weather related dangers, such as monsoons.

The best chance to be safe through monsoon season is to have a plan in place before the weather arrives.

Residents need to avoid the dangers of lightning, flash floods and other weather dangers by tuning into current weather forecasts on television, radio, social media and/or the internet.

Every family should also be prepared for a disaster by having a supply kit handy in case of any emergency.

Official’s say a kit should include essential items such as, three gallons of water, first aid kit, non-perishable food that can be eaten without needing to be cooked, portable battery-operated radio, flashlights and batteries, medicines and personal documents.

“These wind events can dislodge awnings and carports,” Moore said. “They often become airborne during the high winds that are associated with monsoon activity.”

Another cause for concern is flash flooding.

“The potential for shallow water/wash crossings become a hazard and is often a result of a rapid, heavy downpour of rain.” he said. “The risk of flash flooding to our citizens to cross during this time is significant.”

Reports show more deaths occur each year due to flooding than from any other thunderstorm-related hazard because people underestimate the force and power of water. Many of the deaths occur in automobiles that are swept downstream.

“There are several low spots in our roads and it doesn’t take that much for a vehicle to be swept away,” said Mohave County Emergency Management Coordinator Byron Steward.

Steward said residents need to heed all road closures and barricades during the storms.

“Turn around, don’t drown,” is the message we stress to our local residents,” said Steward.

Residents also need to be prepared to go without electricity for a couple of hours in the event of a power outage.

Moore urged citizens to keep an eye on elderly neighbors, who may be without the proper care during a storm or power outage.

And if you’re on the road, the Arizona Department of Transportation is reminding drivers what to do during a dust storm, or a Haboob.

“Pull over, turn off all car lights and wait until visibility is back before hitting the road again,” said a spokesperson for ADOT.

The “pull aside, stay alive” campaign aims to keep drivers off the road during the dust storms that the monsoon season brings. The department says it’s important to turn off headlights and brake lights when pulled over so as to not confuse other drivers who may believe your car is moving.