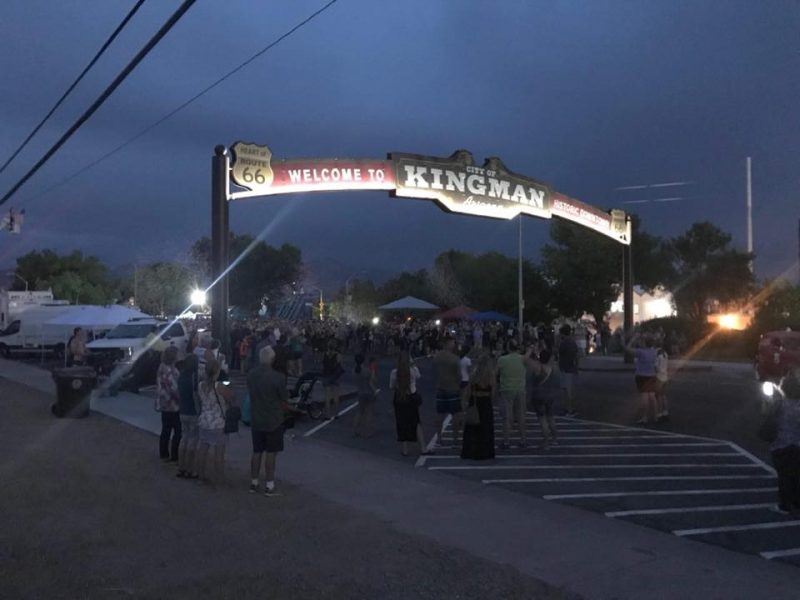 The Kingman Gateway Arch was formally dedicated and illuminated and the finale of the party to show that the town has, and still does, come together.

The City of Kingman took the helm for Downtown Kingman’s First Friday events usually under the watch of the Kingman Main Street Business Group.

Thousands of people were enjoying another successful First Friday. Overcast skies, cool, soft grass and waterslides made it more enjoyable. There was a hum of groveling from some who might say they expected more of a lighting spectacle when the arch was lit about a half hour after sundown. LED lights illuminated the bottom of the sign and nothing more.

Regardless of the lights, people were still taking selfies, admiring the sunset backdrop and meandering up and down Beale Street.

As of about 9 P.M., families were still peeking into the inner workings of the City of Kingman Public Works Department, which was in the spotlight for the night’s activities.

The arch has an estimated price tag of about $170,000 and has been a project more than a decade in the making. It’s been a hot topic for proponents who say the effort will lure both locals and tourists into the downtown district, however, opponents call it a waste of tax dollars.

THE LIGHTS WENT ON

As the sun set, people slowly gathered closer to the arch to wait for the spectacle.

The Kingman Police Department provided an honor guard and presented the colors to a silent, patriotic crowd.

Even the children going down the waterslides were quiet.

Dorothy Brown, a 79-year old Kingmanite and member of the Daughters of Mohave County Pioneers, briefly talked about her memories of the towns history before hitting the old-style dynamite detonator box that lit the arch.

The regular street lights were off and after speeches and a short countdown in the darkness, the confetti burst, and the sign was lit.

Not exactly as exciting as some thought.

Some questions remain as to if the arch’s lighting will look cooler at some point.

People were still floating around Locomotive Park and up toward downtown businesses for food and drinks. A lot of people. First Friday was a hit again.

Mayor Monica Gates was up and down Beale Street for the better part of the evening meeting and greeting. She acknowledged the town’s participation.

“It’s amazing what we can accomplish when a community comes together,” she said.

A city is an animal. We know it as Kingman.

On the outside, it’s the crossroads of the country, both east to west and north to south.

A closer look reveals a mix of an economy and culture based on retirees, young families hoping for a peaceful place to grow, county seat government, sprouting industry and a place for new ideas to take shape.

Almost anyone from those demographics were at First Friday. But somebody must keep the animal breathing and that’s where public works comes in.

Nick Bowers, City of Kingman Engineering Supervisor and one of many co-planners of downtown events, was wiping the sweat from his head after he turned over “PW Paws” duty (the American Public Works Association mascot which the city is part of) over to another city employee.

He briefly described public works operations while catching his breath after walking around in a 10-foot tall plastic wolf suit.

“They’re the front line in making the city run on a daily basis,” Bowers said. “These people are your neighbors. They’re normal people. They’re the same neighbors who get up at 4 a.m. to drive the garbage truck that picks up the trash in their own alley.”

City employees from the streets, wastewater, sanitation, building and fleet maintenance, water utilities and Kingman Area Regional Transit departments were on scene as Beale Street was closed off between Grandview Avenue and First–with displays and demonstrations of what the city’s public works does for the town.

The Wastewater Department had an iPad attached to a microscope so people could see the weird, tiny bugs moving around in an effluent sample. A young child was screaming while watching a garbage truck demonstrate how trash is loaded, while one family was tripping out to the traffic light display from the Street Division.

People were learning how their town works and Bowers was overjoyed by the turnout.

“I talked to a group of tourists who told me they stopped here specifically because they saw the arch and the festival being set up,” he said.

If you’re going to host a party, there better be snacks at the door.

The early stages of development for July’s party was “The World’s Largest Cake”. The logistics of making a cake big enough to be hauled and devoured didn’t work out.

As an alternative, Victoria’s Sugar Shack took on the challenge of cooking, delivering and serving 1,000 Kingman-themed cupcakes.

“We are so excited as a new business to let the public know who we are,” Todd said. “We’re even more excited to have been a part of it.”

According to Sugar Shack owner Victoria Todd, all were devoured shortly after 7 p.m., most likely without even wondering about what goes into creating that many sweet, sugary treats

Todd, baker Gideon Eads, Sugar Shack employees ready to witness the fruits of their labor and math explains what does.

About 60 pounds of frosting, 40 man-hours of labor between five employees over the course of seven days on top of the other baked goods the shack makes. It took 12 hours to bake the cupcakes and an additional 12 hours to decorate 500 of them with hand-painted Route 66 and Kingman Gateway Arch fondants.

The cupcakes had an average diameter and height of three inches. Lined end-to-end, they’d span nearly four times the length of the 62-foot Kingman Gateway Arch. Stacked high, two and a half times to height of the El Trovatore Motel neon sign on Route 66. With an average weight of three to four ounces, they’d equal about 250 pints of beer (or slightly more than six five-gallon kegs of K-Town Weiss from Black Bridge Brewery).

At this point, what’s left is part of the 2 million gallons of wastewater effluent that flow through the city’s two treatment plants.

But it’s all a lesson in what makes a city come together. 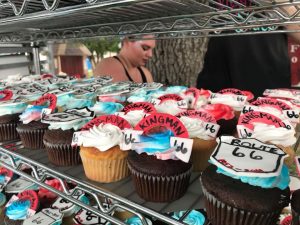 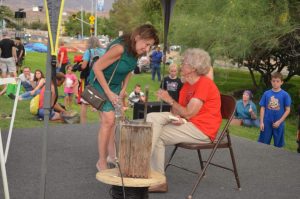